Be lenient with Kan-Dapaah — A Plus begs Ghanaians 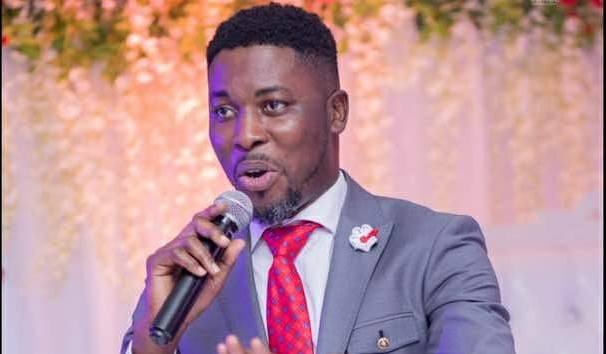 Musician turned politician, Kwame Asare Obeng, popularly known as A Plus, in his elements would have savagely fired Albert Kan-Dapaah over his leaked video call, but the former has pleaded with Ghanaians to deal with the issue with leniency.

On Sunday, January 12, 2020, Ghanaians woke up to a leaked video call of the National Security Minister, paying heads to the orders of a young lady believed to be his 'lover'.

READ ALSO: A Plus calls for resignation of Kan Dapaah over leaked video call
In the 2minutes 56seconds video, Hon Kan-Dapaah could be heard ordered by the young woman to show off his pyjamas among other things.

"What are you wearing? let me see. I want to see your pyjamas. I want to see the front, the back, like the way you did it yesterday", the lady ordered as Mr. Kan-Dapaah was seen making a 360-degree turn.

Ghanaians who have chanced upon the video since it flooded the online space, have given their opinions on the subject. While some are calling for the head of the NPP's high ranking minister, others think the issue should be thrown under the carpet.

Switching to his Facebook page however to comment on the matter, A Plus said he feels passionately worried for the respected democrat, considering that time of the year when his party is seeking to retain power.

According to the controversial musician, the content contained in the leaked video is not something Ghanaians should rejoice over but rather learn from it.

He wants Ghanaian to pardon the Minister as according to him, "When the heart pumps blood into that "langalanga" between our legs, the mind in most cases switches off the part that is meant for caution".

He opined that Hon Kan-Dapaah should resign from the portfolio as the Minister of State in charge of National Security and then apologize to his family, loved ones and all Ghanaians to save his honourability.

Here is A Plus' full opinion: 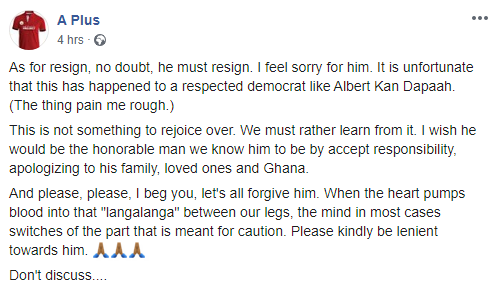 Abdul 1 year ago
When people start to seek power by all means that tell us how they will behave when they final land the power at they are doorstep.