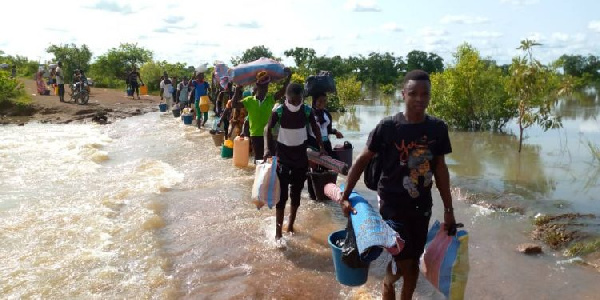 Over 200 final year Junior High School candidates from the Saboba District of the Northern Region who will be taking part in this year’s Basic Education Certificate Examinations (BECE) have been successfully evacuated by the Assembly to the examination center in Saboba.

The students, who were stranded due to a flooding situation caused by the overflow of the spillage of the Bagre Dam, say they are happy they will be taking part in the examinations despite earlier fears.

For the past four days, the entire Saboba District was cut off from other districts due to flooding.

The over 200 out of a total of 1,662 candidates from six communities in the District were worried about the situation.

Speaking exclusively to 3news.com at one end of the river at Wapuli, the Saboba District Chief Executive, George Bingrini, told the news team the situation is a cause for worry.

He explained that the increasing levels of the water has affected activities in the area.

“The Assembly has been able to get 3 canoes and some live jackets to evacuate the students to the other side of the river so they can participate in the BECE examination.”

He indicated that the situation is an annual phenomenon and called for a lasting solution to the menace.

The DCE also wished the students well in their exams. Some of the students said the situation is frustrating.

They expressed gratitude to the assembly for their support.