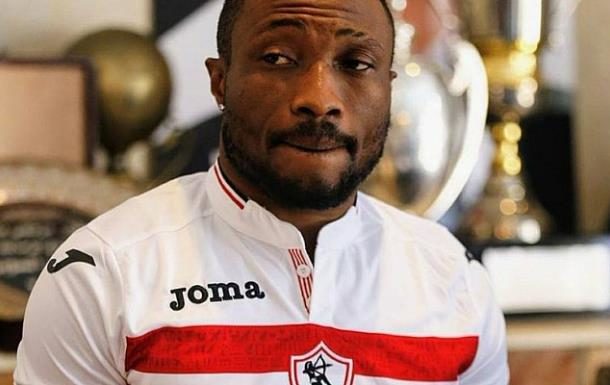 A court in Egypt has sentenced Ghanaian striker Benjamin Acheampong to three years in prison in absentia, after failing to pay an agent his commission over his transfer to the North African country.

The Egyptian Court has also fined $570 over his transfer to the Egyptian top-flight side Zamalek two years ago.

The player has also been ordered  to pay the agent Wael Al-Kharbtawi $23,000 in addition to serving the 36 months in prison.

The 28-year old left Zamalek to join Qatari side Al-Shamal SC in September 2018, after  terminating his contract with the Egyptian side by mutual consent.

As part of the agreement, Acheampong was to wave part of his dues in exchange for his final dispensation.

Wael Kharbtawi filed a lawsuit against the player two months ago, accusing him of evading the payment $23,000 which is the value of the commission the two parties agreed on.

He did not receive the money when the player received his payment from Zamalek prompting the agent to go to court to seek justice.

The agent told the court he attempted to solve the problem in an amicable manner to enable him receive his due but the player did not commit it.

The judge ruled on the case in the absence of the player after he refused to answer to several court summons.

Acheampong currently plays in Qatar which might be the reason why he failed to attend the court hearing which has resulted in the tough sentence.

Kharbatawi is expected to send a copy of the verdict to the player's embassy and send a copy to the Egyptian Embassy in Qatar, where he joined a Qatari club recently.

Acheampong's two yeas stay in Egypt saw him  ply his trade across three of the clubs.

He  joined Egyptian Premier League side Petrojet on a six-month loan from Zamalek in January 2018 after joining the White Knights from El-Dakhleya in July 2017.

His return to Zamalek could not guarantee him regular playing time and had to move to Al-Shamal.

He however insists the lack of payment of his salaries is the reason for his departure.