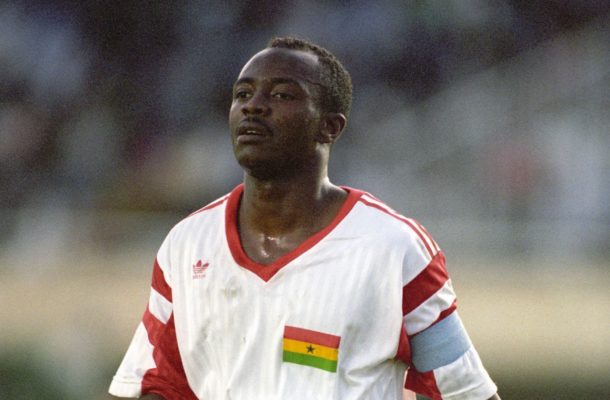 Ghana undoubtedly is one of the best countries in Africa when we talk about football. The Ghanian Black Stars (nickname for the National Team) are known worldwide for their class and strength; most of them are not only famous in their home country but real legends for fans all around the world, especially in Europe.

Most of the football fans clearly remember the Ghanian National Team during the FIFA 2010 World Cup in South Africa: the Black Stars were defeated by Uruguay in the quarter final with the unfamous “save” by Suarez in the last minute of the extra times. Ghana has won in four different editions the African Cup, too, as reported on footballnews.

In this article we will provide a list of some of the best players ever in football history for Ghana. Some of them are really famous worldwide, others are real legends for their home country.


Sulley Muntari is for sure one of the most famous football players in Ghana’s football history, despite not being a striker. He is one of only five players in Ghana who have lifted the UEFA Champions League trophy once in their lifetime, playing for Jose Mourinho’s Inter Milan in 2010. His career in Europe is really impressive and his years playing in Italy are for sure the best in his resume. While in Italy Sulley Muntari has played for Pescara, Udinese, Inter Milan and A.C. Milan, two of the best teams in Europe.

Muntari has played in the United Kingdom (Sunderland and Portsmouth), Spain (Deportivo la Coruna and Albacete) and for Al-Ittihād in Saudi Arabia, before going back to his home country, playing for Asante Kotoko. Sulley Muntari was born in 1984 and right now is still in the business. He has 84 caps and 20 goals wearing the Black Stars’ shirt.


Asamoah Gyan is the top scorer for the Ghanian National Team (51 goals in 109 official matches) and for sure he is one of the best players ever in Ghana. His career in Europe started in the Italian Serie A, playing for Udinese and Modena, being a real globe trotter between France, United Kingdom, United Arab Emirates, China, Turkey and India, before coming back to Ghana, as a player for Legon Cities.


Michael Essien is another Ghanian football player who has lifted the UEFA Champions League once in his lifetime, beating Bayern Munich in 2011-2012 final while playing for Chelsea. Guess who was Chelsea's manager at that time? Right, Jose Mourinho, who appears to know how to enhance Ghanian players in his teams!

Michael Essien has won a total of nine trophies while playing for Chelsea F.C. but the English team is not the only top club he has joined. During his career, Michael Essien has played for Olympique Lyon, Real Madrid and AC Milan among the others, being an important part of each team. He is now assistant manager for Nordsjælland in Denmark.


Abedi Pelè is probably the most beloved football player in Ghana’s football history. Abedi Pelè Ayew became very famous after bringing Olympique Marseille to the UEFA Champions League victory in 1993, being the Man of the Match, playing as an attacking midfielder.

Abedì Pelè Ayew is by many considered one of the best African players of all time and he has been entitled “African Football Player of the year” for three years in a row (1991/1992/1993). His name is in the FIFA 100 (the 100 best Football Players still alive) since 2004, under the supervision of Pelè - the “real” brasilian one.