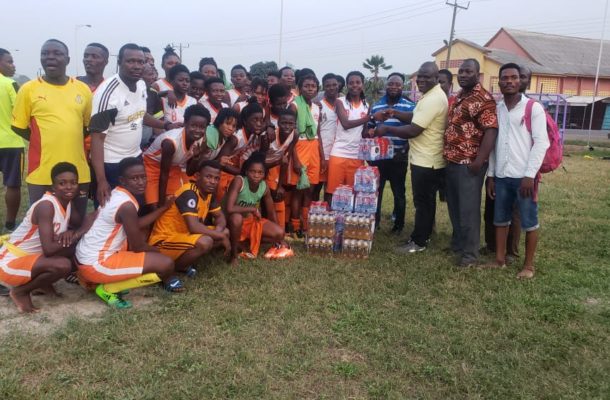 The playing body of Ghanaian women's premier league side Soccer Intellectuals received a huge boost ahead of 2019/2020 league kick off after receiving a donation from teachers of Mando Senior High School,a second cycle institution based in Ajumako Ayan Denkyira District in the central region.

The donation is also in support of a colleague tutor Emmanuel Sellasie Pentem who doubles as the head coach of the club and also a member of the newly constituted Black princesses technical team.

Delivering the items at the team's training grounds at their newly constructed park in Adjumako,Mr Seth Yeboah said it is the teachers widow contributions to development of football in the district.He intimated they were happy to have a premier league club in the district and pledged offer their unwavering support to the club.
He admonished the players to be disciplined and also encouraged them to strive harder to achieve success.

Mary Essiful received the items on behalf of the team and thanked the tutors for the gesture.She added that the items will be a tonic to the playing body as they zoom into the new season.

Mr Robert Otieku Duncan,the owner and banker roller of the team who doubles as the central regional football association chairman noted that it was the first time in many years the club is receiving a donation from an individual or an institution.He thanked them for the donation but like Oliver Twist he asked for more.

Some of the items donated were 10 cartons of mineral water and some assorted drinks.

Soccer Intellectuals will travel to the national capital Accra this Weekend to play as guest to Immigration ladies in the opening fixture of the season.