Black Stars B back from Uzbekistan after 2-1 friendly beating 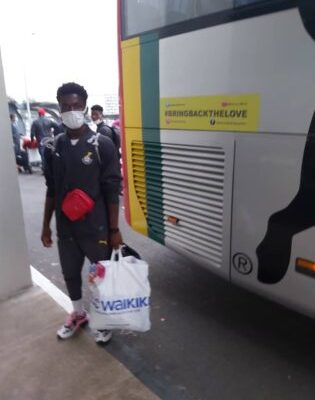 The Black Stars B have arrived in Ghana from Uzbekistan trip where they received a 2-1 beating in an International Friendly played on Friday.

A contingent of players, technical team and staff arrived at the Kotoka International Airport in the early hours of Tuesday after their sterling performance in the Central Asian country.

The Black Star succumbed to a 2-1 away loss to Uzbekistan in a match, which turn out to be Coach Ibrahim Tanko's first assignment since his appointment.

After Ghana U20 star Abdul Fatawu Issahaku cancelled out Otabek Shukurov's opener with a long-range free-kick, Jaloliddin Masharipov capitalised on a momentary lapse in concentration to make it 2-1 for the hosts at Markaziy Stadium in Namangan.

He put faith in Premier League top scorer and Karela United hitman Diawisie Taylor to lead his attack, alongside Issahaku and King Faisal forward Kwame Peprah, but it was the host who managed to clinch victory in the presence of the home crowd.

It was the first time the Black Stars B were playing a game outside Africa with about 25,000 fans attending the game at Central Stadium in Uzbekistan.

The match against Uzbekistan was used as a dress rehearsal for the Black Stars B as they get ready for the 2021 WAFU Cup of Nations in Nigeria and the upcoming CHAN qualifiers.