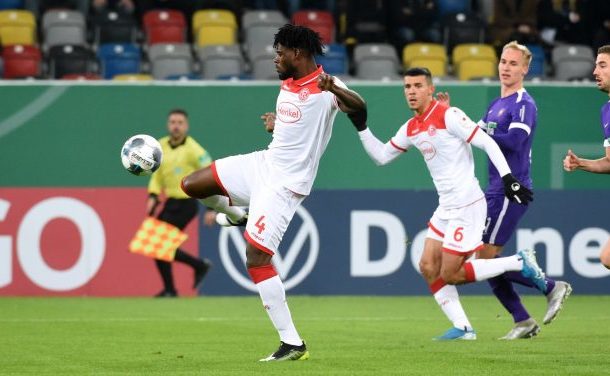 Black Stars defender Kassim Adams on Wednesday scored for his side Fortuna Düsseldorf in the DFB Pokal, pushing them to the next round of the competition.

The Ghanaian netted his team’s second goal and the winner of their encounter with Erzgebirge Aue in the German Cup.

Florian Krüger gave the away side a shock lead on the 12th minute of the game.

The home took equalized on the stroke of half time through Rouwen Hennings 45th minute strike from the spot after Düsseldorf was awarded a penalty.

The Ghanaian international found the back of the net 15 minutes to full time to give his side the lead.

Both teams could not add anymore goals to the pulsating encounter.

The game ended 2-1 in favour of the home side.

Düsseldorf has now progressed to the next stage of the German Cup.