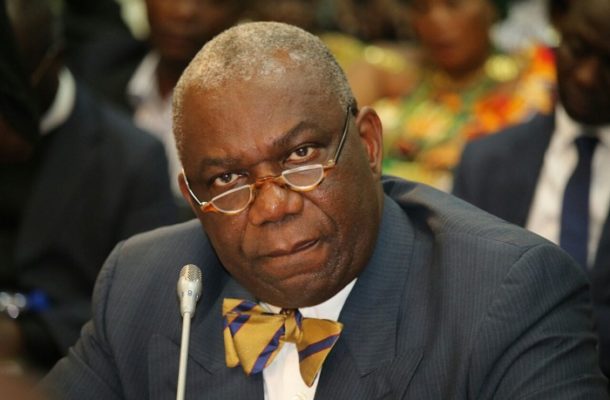 Death has laid its icy hands on one of the combatants of the New Patriotic Party (NPP), Hon. Ishmael Ashitey.

Mr. Ishmael Ashitey who was a former Greater Accra Regional Minister died on Friday, January 7, 2022, at the International Maritime Hospital in Tema.

The cause of his death is not yet revealed.

A family source told Ghanaguardian.com that the former Tema East MP did not show signs of ailments.

He died at age 67, leaving behind a wide and 4 children

The late Ishmael Ashitey was loved by many but only a handful of people had the privilege of sharing close ties with him.

One of such people is NPP presidential hopeful, Boakye Agyarko. The two had a relationship that went beyond being just NPP members and hours after his death, the ex-Energy Minister is out to eulogise him.

He wrote in an eulogy sighted by Ghanaguardian.com that the late Ashitey was his "good friend" and that he received the news of his passing with "shock and sadness".

"I have received with shock and sadness the sudden death of my good friend Ishmael Ashitey," he wrote.

He described him as "a steadfast pillar" in the politics of NPP.

"He was a steadfast pillar in the politics of the NPP and in no small measure contributed to the fortunes of the party in the Greater Accra Region," he eulogised.

Mr. Agyarko recounted some interesting times he shared with the consummate politician when he served as the NPP's Greater Accra Regional Chairman.

"I recall fondness, our working relationship during my time as Campaign Manager when he served as Greater Accra Regional Chairman," he shared.

He added, "My heart goes out to his family. I will continue to pray for the soul of my good friend and may the Lord his maker receive him into his warm embrace."