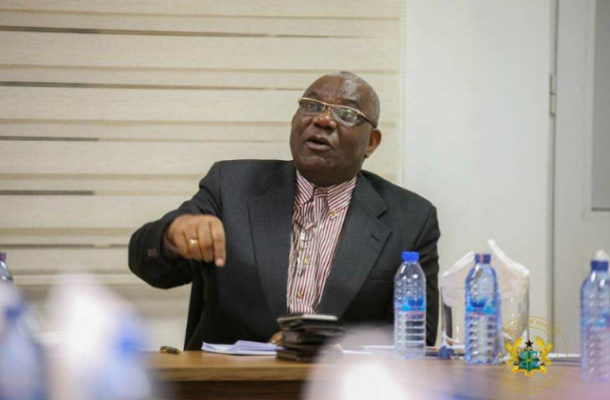 Former Minister of Energy, Boakye Agyarko, has lashed out at former Education Minister, Professor Jane Naana Opoku-Agyemang, over some statements she made about the implementation of the Free Senior High School program, GhanaWeb reports.

Speaking on Oman FM, Boakye Agyarko said that comments made by Professor Opoku-Agyemang to the effect that some invigilators were compromised in the 2020 West Africa Secondary School Certificate Exam (WASSCE) is an indictment on the credibility of the exams.

He, therefore, challenged Professor Opoku-Agyemang to substantiate her claims with evidence of invigilators assisting students during exams.

He guessed that Professor Opoku-Agyemang’s criticism of the program could be because she is unaware of the impact the program has made on less-privileged families.

“Maybe she had it easy because her parents took her to Wesley Girls so she doesn’t understand what poverty is. If we are going to sit down and engage in petty arguments about Free SHS. She has damaged the reputation of some invigilators that they were compromised. Who are the invigilators? How were they compromised?”

Boakye Agyarko attacked the personality of Professor Opoku-Agyemang and asked her to speak in a way that reflects her age.

“You see, she’s an old person. Naana, you are past 70 so speak in a way that glorifies God. Your statement and conduct must glorify God for giving you seventy years. Some people didn’t get it, so if you are 70 plus, don’t engage in lies and falsehood. She shouldn’t go there. I listened to her and I’m so disappointed. She, an academic and a professor as such.

“When you listen to her argument, she claims to have heard. Is that the level of evidence or extent of logic that can be advanced? Can you base on rumours and speculations? A whole professor relying on speculations. How many kids did she listen to? Is she telling us until the recent exams, she hadn’t heard of exam leaks and that we don’t use past questions for learning?”

Professor Opoku-Agyemang in an interview with Woezor TV raised a number of issues with the implementation of the program.

She also suggested that the 2020 batch of Senior High School students excelled because some compromises were made by the authorities.

She said "we have also heard and seen students who wrote an exam, came out and it was like, you know we had an earthquake in this country, it wasn’t like one school or two schools… this same group's performance is supposed to be outstanding that we shouldn’t be talking, it is the group I am referring to,” she said.

She added, “And they went and wrote the exams we heard of the leakage of the exams, we heard of invigilators being compromised, we heard many things and we also saw the students come out and speak about, ‘no this is not what we were told will happen’, now these students have As and we are happy? It is up to us.”