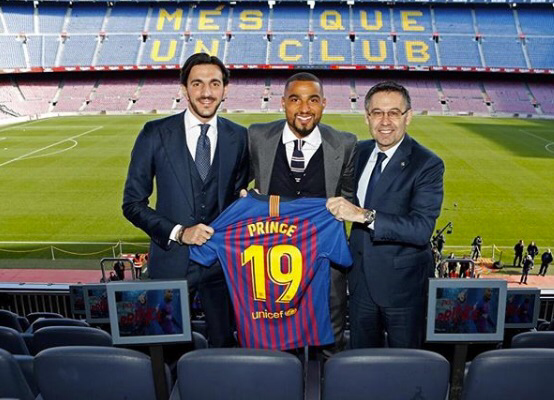 The mastermind behind Kevin-Prince Boateng’s shock transfer to Barcelona in the January transfer window, Edorda Crnjar insists the Ghanaian international has ‘earned this great opportunity.’

Boateng joined the Catalan giants on a loan deal for the remainder of the 2018/19 season. The agreement includes an €8m purchase option.

And the 28 year old super agent believes his long-time client has merited the move and thanked Sassuolo for their co-operation.

"It's all about Prince, he has earned this great opportunity. I want to thank Sassuolo and the coach for the opportunity granted. He had already played in Spain and this was an advantage. We will see how the season will continue in blaugrana”

Crnjar’s first major transfer was the move by Sulley Muntari from Inter to AC Milan in first on-loan in January 2012 and later on a permanent basis.

Then came associations with another then Milan-based player Boateng whom he has represented since he left Milan for German side Schalke 04 in August 2013.

He has since represented other Ghanaian players including Mubarak Wakaso and Kwadow Asamoah.