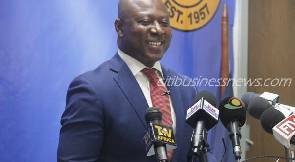 The Bank of Ghana (BoG) is strengthening its licensing requirements in order to weed out unscrupulous microfinance institutions from the system.

Dr Abdul-Nashiru Issahaku, the Governor of Bank of Ghana, said recent events had shown that unregulated and poorly supervised financial systems might lead to risky behaviours and undermine the growth process.

He said for this reason the Bank was taking steps to continually improve its regulatory and supervisory responsibilities to ensure that only strong and well-managed banks and microfinance institutions operated in the country.

Dr Issahaku made these remarks at the fifth Ghana Economic Forum in Accra.

The two-day forum, which is being organised by the Business & Financial Times, is on the theme: “A Ghanaian-owned Economy - Setting the Agenda for Achieving It.”

The theme was chosen to reflect the increasing need for more high-end jobs and investments in the economy that would keep monies home even as foreign direct investments takes its share.

He said the Central Bank would continue to ensure that commercial banks in the country were well-capitalised and regularly monitored.

He said in particular, the Bank had been carrying out periodic increment in the minimum capital requirement of commercial banks.

Dr Issahaku said this was to enable them to be well-resourced to undertake huge loan requests, especially from the mining and the burgeoning crude oil sector.

He noted that the Central Bank had ensured competition among the various banks by licensing more qualified banks to operate in the sector.

The Governor said promoting competition had enhanced efficiency and productivity within the banking system.

“We have also built an appropriate credit infrastructure to support credit delivery, which would in turn help lower the ratio of impaired loans and address the risks in lending,” he said.

“For its functions to be strengthened, the Collateral Registry has recently been transformed into a department,” Dr Issahaku said.

He said in particular, BoG’s efforts at expanding the financial sector and capital markets through a series of financial sector reforms would ensure efficient allocation of resources to firms with the most promising prospects through information gathering and screening of borrowers.

The Governor said this would allow firms with the best prospects to secure funds and make the necessary investments in capital formation leading to economic growth and job creation.

On long-term structural reforms, the Governor said although prudent monetary and fiscal policies were critical to sustaining economic growth and investor confidence, such policies must be supplemented with structural reforms, taking into account their short-term implications on the economy.

Mr Mike Nyinaku, the Chief Executive Officer (CEO) of BEIGE Capital, called for the creation of Ghanaian-owned economy where at least 40 per cent of Gross Domestic Product is derived from economic activities of businesses of Ghanaian-ownership.

He said it was normal to expect most of the small and medium enterprises in any country to be owned and run by natives, however, there’s also an emerging trend where natives are beginning to own respectable shares in multi-national companies operating in their respective countries.

Mrs Edith Dankwa, the CEO of Business & Financial Times, said coming from the battering of a three-year energy crisis, hyper-inflation, the most depreciating currency on the continent and heavy borrowing by government, Ghana was now in a mixed zone of pessimism and optimism.

“With the International Monetary Fund stabilising the currency and putting in place measures for growth which include the taming of the twin-deficits, Ghana is not only poised for stability but sustained growth,” she said.