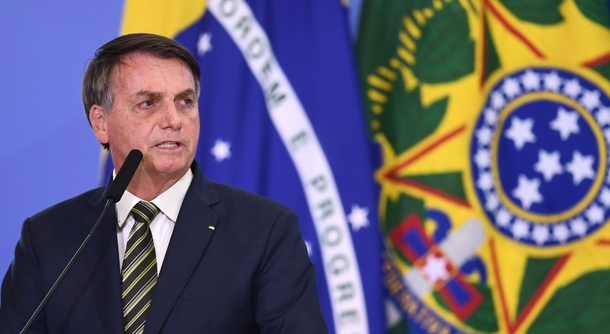 Seems impossible but there are still some world leaders out there who make President Trump’s handling of the Covid-19 crisis look adept.

Bolsonaro has regularly dismissed the threat posed by coronavirus to his country, calling it a “little flu” in April and recently participated in an anti-lockdown rally on Sunday that opposed stay-at-home measures imposed by state governors (sound familiar?).

As well as stating that the economic impact of quarantine would be more deadly than coronavirus itself, Bolsonaro is keen to re-start another cornerstone of Brazilian culture: the football leagues.

Despite passing 100,000 confirmed cases, Bolsonaro thinks it’s fine for professional footballers to go back to their day job because they have a “small chance of dying”.

“There is a lot of people in soccer that are favourable to a return because unemployment is knocking on clubs’ doors too,” Bolsonaro told Brazil’s Radio Guaiba on 30 April, according to The Guardian.

Footballers, if infected with the virus, have a small chance of dying. That's because of their physical state, because they are athletes.

Bolsonaro went on to suggest that footballers could return and play to empty stadiums, although he admitted he’d been told players were reluctant to follow that plan.

Experts have warned against the league resuming; Tânia Vergara, president of the Brazilian Society of Infectious Diseases, told Globo Esporte that there was a high risk of contamination, particularly if players were asymptomatic and receive a false-negative result from a test, mistakenly causing them to believe they’re not infected.

He also said there was no evidence to support Bolsonaro’s claims that athletes have a reduced risk of death.

Although no professional footballers are reported to have died from Covid-19 yet, a number have publicly reported being infected, including Chelsea player Callum Hudson-Odoi.

Twenty-one year-old football coach Francisco Garcia died after contracting Covid-19 but was diagnosed with leukaemia, which doctors say made him more vulnerable to the devastating symptoms of the virus.

Other Brazilian athletes have also been infected, including basketball player Leandrinho Barbosa who said he “felt like he was going to die”.

Bolsonaro’s comments did not go down well with football chiefs.

Raí Souza Vieira de Oliveira (known as ‘Raí’), former footballer and current General Manager for São Paulo, called them “irresponsible” and even suggested impeachment in an interview with Globo Esporte.

“Because of him, thousands more deaths will happen,” Raí said.

If only there was a cure for inept leaders.