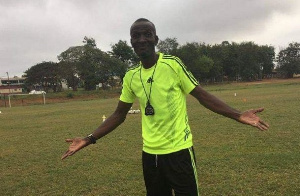 Accra Great Olympics coach Prince George Koffie has resigned after his side suffered 1-0 defeat by WAFA in the GPL match week 7 at the Accra Sports Stadium.

Prince had been in charge with barely four days to the commencement of the season after Isaac Nii Armah vacated his post as head coach.

Prince Koffie met on Monday with Olympics management, who accepted his decision to leave, the reliable source told Ghanaguardian.com

The Wonder boys are 14th in the table with
seven points from seven games.

His final game in charge was a 1-0 defeat by the West Africa Football Academy (WAFA).

Prince signed a two-year contract with the Dade club in December 2019.

Whoever comes in has a huge job to handle, as the adage goes coaches are hired to be fired.