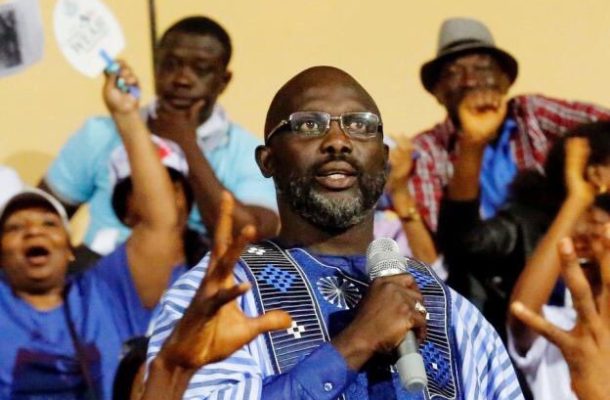 George Weah has made history as he has been voted as the new President of Liberia after trouncing his opponent in Tuesday's second round of voting, Ghanaguardian.com can exclusively reveal.

The former World Footballer of the Year swept 13 out of the 15 counties with his 73-year-old opponent Joseph Boakai getting only two counties - Ghanaguardian.com can reveal.

Weah markedly improved on his showing from the first round of the election where he won 11 out of the 15 counties, sweeping to the emphatic victory to become the new President.

The former iconic footballer Weah become the first famous player in the world to clinch the high office of a country after retiring from the game.

The delayed vote on Tuesday pitted George Weah, a 51-year-old ex-international football star and Liberian senator, against 73-year-old Joseph Boakai, who has been the country's vice president for the last 12 years.

Weah, who topped the first round of voting but did not secure the 50 percent needed to win outright, won the runoff after soundly beating Boakai.

Insiders close the the Weah camp have told Ghanaguardian.com that the results they have collated so far indicates that the former football star has won the election with about 80% of the votes counted so far.

Weah took to social media to give a disguised victory message telling his supporters he is on 'the verge of making history for our people' and thanked the people for their votes.

I am deeply grateful to my family, my friends, and my loyal supporters who contributed to our campaign during this extremely long election season. We are on the verge of making history for our people. #Liberia #Liberia2017 #ChangeforHope
— George Weah (@GeorgeWeahOff) December 26, 2017

It is with deep emotion that I want to thank you, the Liberian people, for honoring me with your vote today. It is a great hope. #Liberia #Liberia2017
— George Weah (@GeorgeWeahOff) December 26, 2017

The finals results are expected four days but efficiency of the electoral body has resulted in votes being counted faster.

According to observers from the EU and the Liberia Elections Observation Network (LEON), a network of civil society associations, voting was conducted much faster than in the first round, thanks in particular to lists of the electorate several days in advance and better training of staff to supervise the vote.

Nearly 2.2 million people were eligible to vote in the runoff in the West African country.

Initially scheduled for November 7, the vote was delayed after the party of a third candidate filed a legal complaint alleging voter fraud and irregularities.

Both Weah, the candidate for the Congress for Democratic Change (CDC), and Boakai, of the Unity Party, had promised to revive Liberia's struggling economy and kickstart infrastructure projects but it is clear the former footballer will now bear that responsibility.