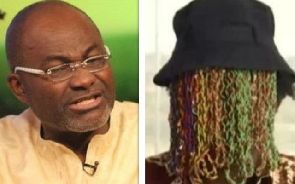 Maverick politician Kennedy Agyapong has shockingly released audio, similar to the voice, of undercover journalist Anas Aremeyaw Anas negotiating to get his cut from a $1.9m shady deal with three others to destroy an investigation in court.

The four guys were heard in the audio negotiating on how to destroy the case in the Hausa and English language at the courts before demanding that the money must be released to the bank.

According to the MP, the negotiation took place at Accra New Town when some boys successfully managed to make off with some money belonging to some Nigerians with one Mubarak a key actor in the game.

LISTEN TO THE AUDIO OF THE SUPPOSED ANAS NEGOTIATION

The audio was extracted from a yet to be released video of Anas negotiating for bribes and played on local radio station Adom FM by Kennedy Agyapong.

The audio also revealed that $175,000 was also released into an account that had to be shared among them with the voice of what looks like Anas lamenting that their other cohort in the massive scam had used ''the money to buy a VW Toureg and chasing girls, girls. I heard it all''.

The release of the explosive audio is in fulfillment of Agyapong's promise to expose the journalist for blackmailing people and taking bribes to stop investigations.

Anas' integrity suffered a major blow on Friday when the Tamale chief revealed that the undercover journalist took a bribe of $50,000 to drop an investigation he was carrying out on his activities.

Mohammed Hafiz Abdullah, the Dema Naa of Tamale, made this shocking revelation on Friday revealing how Anas demanded money to drop the investigation.

The claims by the Tamale chiefs corroborate Ken Agyapong's claims of fraud against Anas who has been under fire from many quarters last week.

Agyapong's allegations of fraud and corruption against were on Friday, June 1 corroborated on Net 2 TV by man claiming to have been duped by Anas.

MP for Assin Central, Agyapong has been on a mission to expose the journalist, Anas following the latter's 'Number 12' expose which is set to be premiered from June 6 across the country.

While Anas has been widely commended over his work, Kennedy Agyapong has claimed Anas' methods of "inducement and entrapment" were unfair and self-serving and thus must be stopped.

The outspoken MP released photos of Anas and has described the journalist as an extortionist and a criminal who sells his videos to the highest bidder.

According to Agyapong, he has video evidence of Anas taking a $100,000 bribe and was going to show it after Anas' premiere after he returns from a business trip in China.