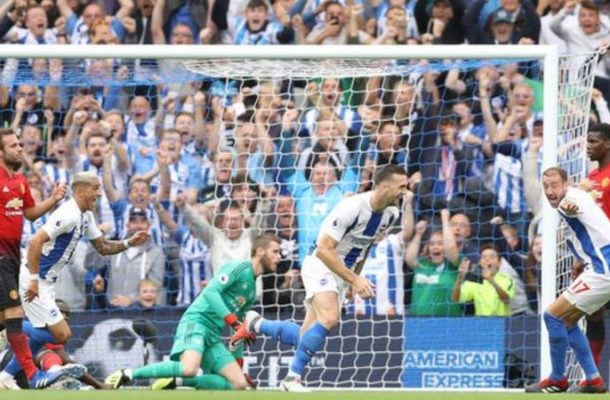 Brighton stunned a lacklustre Manchester United with three first-half goals to secure a famous victory at the Amex Stadium.
The Seagulls beat United in May to retain their Premier League status, but few expected a repeat on Sunday.

However, Brighton capitalised on a poor start from United to take the lead on 25 minutes, when Glenn Murray flicked home Solly March's low cross.

But Eric Bailly's rash challenge on Pascal Gross inside the area presented Brighton with the chance to restore their two-goal advantage, which Gross took.

United improved marginally after the break but never really looked like threatening a fightback, though Paul Pogba netted an injury-time penalty after Duffy brought down Marouane Fellaini.

It was a day to forget for United fans, especially after their neighbours City swept aside Huddersfield 6-1.


United boss Jose Mourinho warned in the summer that his side faced "a difficult season" if they did not strengthen before the transfer window closed.

The Portuguese had highlighted his side's defence as an area that needed bolstering, but deadline day passed without any new arrivals.

Mourinho's concerns were laid bare here, with his defence caught out on a number of occasions by Brighton's quick movement.

Bailly, in particular, struggled. Aside from giving away the penalty he also miscontrolled a pass in the second half that momentarily put March through before the Ivorian was able to recover.

Bailly and centre-back partner Victor Lindelof - both Mourinho signings - have now been a part of a defence that has conceded four goals in the first two games of the season. It took United nine to let in that many last season.

Fortress Amex as intimidating as ever


Brighton's home form played a huge part in their survival last season, with 29 of their 40 points secured at the Amex Stadium.

Once again, it looks like a trip to south coast will be a difficult one for their Premier League rivals.

United may have been well below par but that should not take away what was a controlled and confident display by the Seagulls against a side that finished second last season.

They took the game to their opponents from the outset, March working the defence with an early cross, and even the loss of influential defender Lewis Dunk did not disrupt them as Anthony Knockaert got in behind before putting his shot just wide.

Brighton did not have a shot after the break, but they did not need to as they changed tack from attack to containment. In the end it was a comfortable afternoon for Chris Hughton's side.

Martial fails to take his chance


Alexis Sanchez was a surprise absentee from United's starting XI, with Mourinho confirming before kick-off that the forward was injured.

That meant Anthony Martial, who has been linked with a move, was handed the chance to impress.

Mourinho was critical of Martial for his performance here in May, and another ineffective display will surely not have impressed his manager.

Martial lasted until the hour mark before he was substituted with neither he nor Mourinho appearing to acknowledge each other as he went down the tunnel.

Man of the match - Solly March

A first for Paul Pogba - the stats