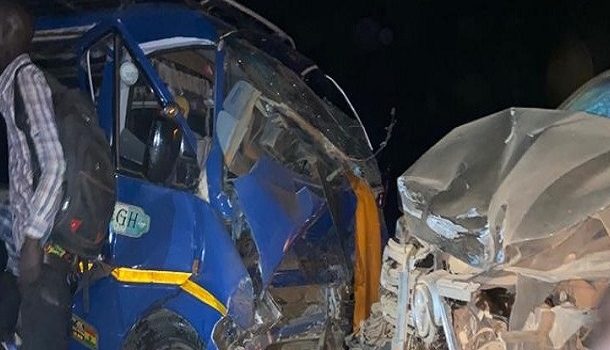 The crash occurred after a stray donkey crossed them

The Chief Executive Officer (CEO) of the National Food Buffer Stock Company Limited, Alhaji Abdul-Wahab Hanan Aludiba and his aide Haruna Abdul-Basid have been rushed to the Bolgatanga Regional Hospital following their involvement in an accident, MyNewsGh.com has reported.

According to information gathered Mynewgh.cm, Alhaji Abdul-Wahab Hanan Aludiba and other occupants of his Landcruiser vehicle were returning from Garu where they had gone to campaign ahead of Monday’s presidential and parliamentary elections.

On reaching a section of the road between Bawku and Zebilla around Bazua, a stray donkey crossed them and in an attempt by the driver to swerve the animal, their vehicle collided head-on with an oncoming urvan commercial vehicle.

Occupants of the urvan who are said to be in critical condition, have been rushed to the Zebilla Hospital in the Bawku West District while the appointee and his aide are in the capital.

Sources at the Bolgatanga Hospital reveal to MyNewsGh.com that though both are injured, they are in stable condition and recuperating.