Bukom Banku returns to the ring on December 26 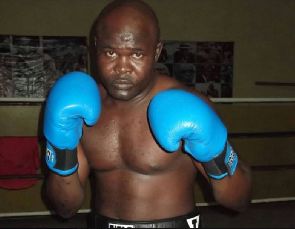 Controversial Ghanaian boxer Braimah Kamoko alias Bukom Banku has vowed to vent his spleen on Nigerian brawler Kabiru Towolawi by stopping him in the third round of their international cruiserweight contest scheduled for December 26, 2018 at Kwahu Abetifi.

Kamoko previously undefeated in 29 bouts saw his invincibility erased in a devastating fashion by Bastie Samir on October 17, 2017 a loss he admits still haunts him even after he stopped John Dugu in the second round of his next fight after that loss on April 2018.

According to him, even as he continues the hunt for sponsors to finance his much-awaited rematch against Bastie, his fight against Towolawi who trains out of the Storm Gym in Lagos will provide him with the opportunity to remind Ghanaians of his boxing skills.

Banku's opponent has a fight record of nine wins and one loss but the Ghanaians insists he will not be deceived into taking it easy because of his record.

Speaking at a press briefing on Tuesday at the Bukom Boxing Arena in Accra, Banku who turns 40 next June said gone are the days when he underrated his opponents. He said that bad habit contributed to his loss against Samir.

"I have at least one and a half years in boxing and I am the star for this promotion, so I will not underrate this Nigeria boxer.

"My original trainer Wadaada is not feeling well, so I have replaced him with Tetteh Klan and I will stop him in round three, after that I want the Bastie fight".

Responding to questions about viral videos of him wearing lashes and a bleached skin, the thought talking fighter said they were just gimmicks to make him more popular.

The Kamoko-Towolawi bouts headlines a six-fight bill organised by Kwahu Republic and Azumah Nelson Promotions as part of the Bliss on the Hills entertainment event.

In the remaining undercards, Theophilus 'Stopper Tetteh' will fight Felix Okine for the National Super Bantamweight title, Joseph Lamptey and Justice Addy will lock horns for the national welterweight title and Razak Nettey and Nathaniel Nukpe will face off in a national super featherweight final eliminator.

The Founder of the Azumah Nelson Boxing Promotions, Azumah Nelson said his outfit decided to partner the Kwahu Republic as part of efforts to give boxing a nationwide appeal.

He therefore urged all the boxers on the bill to seize the opportunity by giving their best on December 26.

The Events Coordinator of Bliss on the Hills, Mr Kwesi Ernest, also disclosed that no fees will be charged to witness the bouts.