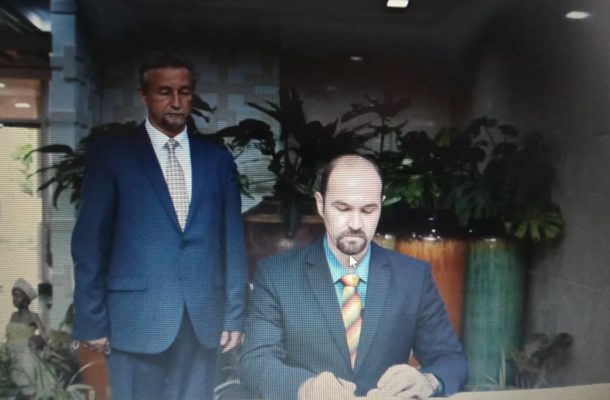 After an absence of a Bulgarian Ambassador in Ghana for almost two years, the President of the Republic of Ghana, Nana Ado-Dankwa Akufo-Addo on Tuesday, November 23, 2021, received and accepted the Credentials of His Excellency Yanko Vasilev Yordanov as the new Ambassador Extraordinary and Plenipotentiary for Bulgaria to Ghana.
Ambassador Yordanov has been the previous Charge d’Affaires for Bulgaria to Brazil and a diplomatic officer at the Permanent Mission of Bulgaria to the United Nations.

He is an expert in United Nations and Cooperation for Development. He is the Resident Ambassador for Bulgaria to Nigeria and the representative for Bulgaria to Economic Community of West African States (ECOWAS).

During his 3 day visit from Abuja he revived and re-established Bulgaria’s official relationships with the Embassies and missions of the United Nations, EU Delegation and the Dean of the Diplomatic Corps in Ghana.

Ambassador Yordanov mentioned to the President of Ghana the 60-year relationship between Ghana and Bulgaria, the already ongoing joint projects between our nations and extending Trade Relationships through the Bulgarian Embassy in Abuja and the Honorary Consulate in Accra.

The Bulgarian envoy also put emphasis on joint bilateral initiatives that resulted in agreed Memorandum of Understanding for Cooperation between National Library of Bulgaria and Ghana Library Board and successful recent conclusion of the negotiations between Bulgaria News Agency and Ghana News Agency on partnership agreement. Moreover, Bulgaria’s Diplomatic Institute will be amongst first partners of the soon to be established Ghana Foreign Service Institute as both Ministries agreed on Memorandum on Cooperation in this field.

Ambassador Yordanov also mentioned irregularities taking place on the former Bulgarian Embassy in Ghana and President Akufo-Addo gave the assurance that he will personally do all within his power to restore the ownership of the Bulgarian diplomatic premises into Bulgarian hands.

The President further complimented the Bulgarian Ambassador on the return of Bulgaria to Ghana and wished that Trade and Cultural relationship returned to its old glory.