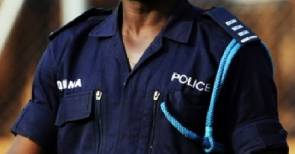 The two Police officers who were arrested in connection with the GCB Bullion Van attack at Donkorkrom have accused another police corporal of aiding their escape.

The officers were picked up for their alleged roles in the robbery incident that led to the killing of the driver of the van.

They earlier escaped from custody but were subsequently arrested by their colleagues.

The development led to angry residents burning the Police station in the community amidst protest.

The officers who were arraigned before an Mpraeso magistrate court today fingered one Corporal Christopher Babudu, who was escorting them, of aiding their escape.

Meanwhile, the IGP has announced that the Police officers who helped in the arrest of the suspects have been promoted by the service.

“It is gratifying to note that the patrol team that effected the arrest of their colleagues have been promoted effective yesterday to their next ranks. In addition to maintaining general law and order in the country, one cannot lose sight of the fact that we have to also ensure that the December 2016 election will be delivered peacefully and successfully. On that score, I can assure the people of Ghana that we are committed to attaining that feat. With the support of all Ghanaians, we shall overcome,” the IGP noted