Burnley out of Europa League 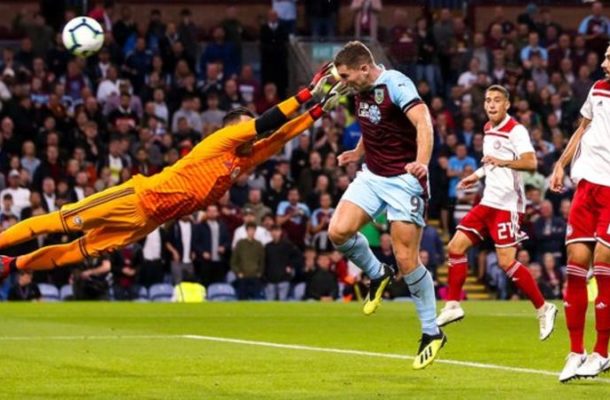 Four of the last five English sides to take part in Europa League qualification have failed to reach the main stage of the tournament (also West Ham in 16-17 & 15-16, and Southampton in 15-16)

Burnley rediscovered their identity despite crashing out of the Europa League, says manager Sean Dyche.
The Clarets failed to make it through to Friday's group stage draw after wasting a string of chances in their play-off round second leg against Olympiakos at Turf Moor.

The hosts were punished when Daniel Podence fired into the roof of the net after a counter-attack before substitute Matej Vydra scrambled an equaliser.

However, Burnley lost on 4-2 on aggregate and, after securing a return to European football for the first time in 51 years, are out after just 36 days and six games.

Dyche, who has seen his side make a stuttering start to the Premier League season, preferred to concentrate on the positives afterwards and insisted the club would learn from the experience.

"That performance was back to where we belong, it's back to everything we are about," he added.

"I wanted our team to get back to their identify and I felt that was clearly on show from the first whistle to the last.

"We mixed our play well, we created chances, there was energy - all the things you want from a performance.

"The result doesn't get us through but it could have easily have turned our way."


Burnley will be kicking themselves they will not be joining Arsenal, Chelsea, Rangers and Celtic in the group stage draw.

It was a case of so close yet so far as they created enough chances to turn the tie on its head inside the opening 45 minutes alone.

After the full-time whistle, Dyche applauded home fans who had encouraged their team throughout the tie, while Olympiakos' players celebrated in front of their small band of travelling supporters.

Burnley dominated from start to finish but it was not to be.

Vokes was unfortunate to see his curling attempt rebound off a post early in the second half having earlier missed two golden opportunities.

He headed agonisingly wide after a super cross from the impressive McNeil, making his first competitive start, before putting a header from point-blank range over the bar.

Barnes saw a deflected first-time shot roll wide while McNeil, who was brought up in Manchester United's youth academy, forced a one-handed save from Andreas Gianniotis.

Olympiakos used their vast European experience to progress, Podence's away goal seven minutes from time making it 4-1 on aggregate to end Burnley's realistic hopes of going through.

Czech Republic forward Vydra did manage to mark his first appearance since signing from Derby with a goal after a scramble inside the Olympiakos penalty area.

However, the goal came too late to prove significant.

Dyche's side had overcome Aberdeen and Istanbul Basaksehir to reach the play-off round but their European adventure is over and Burnley are left to focus on the Premier League, where they are yet to win and host Manchester United (16:00 BST) on Sunday.

"The whole club will learn from this experience," added Dyche. "It bodes well for the future but we have got to use it wisely because we want these players to continue growing and we want to get stronger as the season progresses."

Why McNeil impressed - the stats