Business booms in Cape Coast ahead of NDC campaign launch 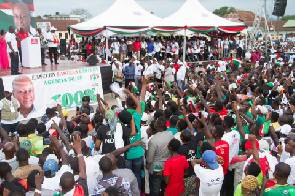 Business activities in the Central regional capital, Cape Coast, have seen a massive surge as fateful of the ruling National Democratic Congress converge in the town to launch their party’s campaign for the 2016 elections.

The various hotels, motels and guest houses in the municipality have been booked with many supporters making accommodation arrangements in private homes.

Both President John Mahama and his vice president Kwesi Amissah Arthur as well as executives of the umbrella family are expected to be at the launch Saturday.
 
Ghana goes to the polls on December 7 to elect a president and members of parliament.

President Mahama and Nana Akufo-Addo of the New Patriotic Party are the frontrunners in the elections. Nana Akufo-Addo is making his third consecutive chase at the Flagstaff House while President Mahama, who ascended the throne after the demise of his boss John Atta Mills in 2012, will be making a second term attempt.

Ahead of the crucial polls, a survey by the Center for Democratic Development has suggested that though about 70 percent of Ghanaians believe the economy is headed in the wrong direction, about half of the populace are of the conviction that the President is good at his job.