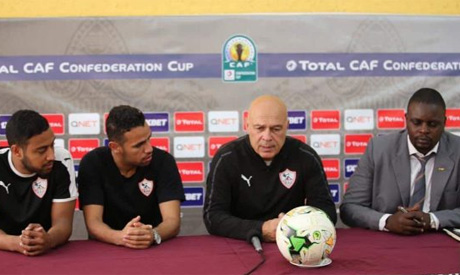 The CAF Confederation Cup offers the stiffest competition at the African level this season, according to Zamalek's coach Christian Gross.

Zamalek were stunned by 4-2 loss at Kenya's Gor Mahia in Confed Cup on Sunday.

The Cairo giants were seeking a winning start in their group stage campaign.

Gross had stressed before the game that winning all the group stage matches was  a priority for the Whites Knights.

"The Confederation Cup is the strongest at the African level this season. We are currently fully concentrated in reaching the next round successfully," Gross said at the pre-match press conference on Saturday.

"We need 10 points to reach the next round. Sure, we want to win all the group stage matches even if we ensure our qualification early,.

"It's difficult to speak about the rivalry between the teams in our group before playing the first three matches.

"I respect the players of our Kenyan opponent, especially as they are strong on the physical level. All the matches will be difficult and need much effort," he added.

But an  error-ridden defensive display at the Nairobi City Stadium got them battered in a stunning 4-2 defeat at Kenyan in their opening group stage game.

In an end-to-end first half, Gor Mahia's Jacques Tuyisenge and Zamalek winger Ibrahim Hassan scored two goals apiece as both sides went to the locker room tied at 2-2.

In the second half, Zamalek committed a series of costly and uncharacteristic mistakes at the back, with their players appearing to drag their feet as Gor Mahia took control.

Nicholas Kipkirui put the hosts ahead early in the second half and veteran striker Dennis Oliech ensured the win with a stoppage time goal as Zamalek's shaky defence was torn apart.

They are on top of the domestic league after winning nine of their last 10 games,but lying at the bottom of Group D Confederation Cup with no points.

At the domestic level, Zamalek are in the driving seat in the Egyptian Premier league with 45 points from 18 matches, six behind second-placed Pyramids FC who have played two matches more.

"We will be facing an intense schedule in the coming period, so our formation could see some changes," the former Tottenham, Stuttgart and Basel coach concluded.