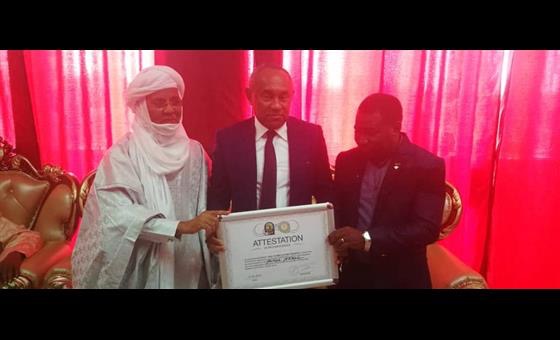 CAF President Ahmad Ahmad has been honoured by the government of Niger for supervising the country’s successful staging of the Total U20 Africa Cup of Nations.

Niger Prime Minister, Mr.Brigi Rafini recognized the role of the leader of the Confédération Africaine de Football (CAF) in the country’s successful hosting of the continental youth tournament.

Ahmad was given the award on Sunday at the half-time of the final of the tournament played in the Nigerien capital Niamey.

The West African country was staging a continental tournament for second time as eight countries battled for the title and four places at the U20 World Cup.

Mr. Rafini hailed the role of Mr. Ahmad in helping the country stage the tournament claiming it helped to project the nation positively to the world.

The award was given to Ahmad Ahmad in front of dignitaries attending the final match between Mali and Senegal, as the Niger FA President Djibrilla Hima accompanied joined to hand the gong to the CAF President.

"Niger is grateful for the opportunity CAF gave us to host the rest of Africa. We have showcased our country to the world thanks to you Mr. Ahmad, » Mr. Rafini said.

Niger staged the eight-team tournament with the cities of Niamey and Maradi hosting the matches.
Mali won its first trophy in the age category after beating Senegal 3-2 on penalties in Niamey after the match ended 1-1 at full time.

This year’s third place winners are South Africa who also beat the seven-time winner of the trophy Nigeria 5-3 on penalties.
South Africa, Nigeria, Mali and Senegal will represent Africa at the Under-20 World Cup which kicks off in Poland in May this year.