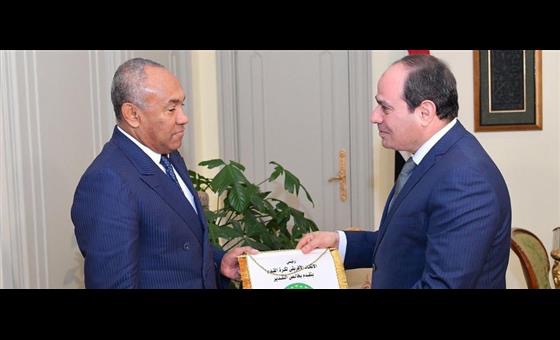 CAF President Ahmad Ahmad on Wednesday (20 February 2019) paid a courtesy call on Egyptian President Abdel Fatah El-Sisi at the presidential palace in Cairo to discuss the impending Total Africa Cup of Nations amongst others.

During the meeting, El-Sisi emphasized the need for effective coordination between the related agencies to ensure a successful tournament that will meet both continental and international standards.

He also tasked the government agencies to facilitate the upgrading of facilities and infrastructure in the five designated cities namely Alexandria, Cairo, Ismailia, Suez and Port Said specifically in the areas of Stadia, Medical, Transportation and Communication.

Elected Chairperson of the African Union during the body’s Ordinary Session few weeks ago in Addis Ababa, Ethiopia, El Sisi underscored the role of sports especially football in promoting peace and unity on the continent.

On his part, CAF President Ahmad lauded his Egyptian counterpart for the huge interest towards a successful Africa Cup of Nations, which will have 24 teams for the first time.
He later presented a symbolic pennant to the Egyptian President El-Sisi, assuring the commitment to hosting a memorable tournament.