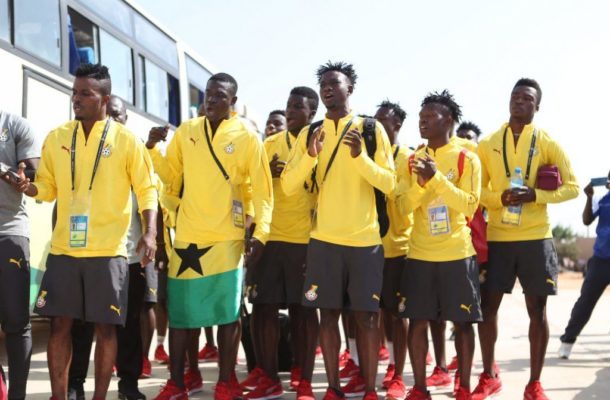 Ghana U20 team the Black Satellites on Monday grabbed a flying start to the 2018 Africa U-20 Cup of Nations with a 2-0 victory over Burkina faso in their rescheduled Group B opener.

The Black Satellites profited from some sloppy defending by the young Stallions to score the pair of goals that has made joint group leaders with Senegal who beat Mali by same margin on Sunday.

Lomotey won the physical battle against centre back Kone inside the box and lobbed the ball over goalkeeper Traore for the opening goal just on the nick of half time.

The Satellites began the game very well, showing promises in great attacking prowess but lacked fluidity in the final third to bury their chances.

Burkina on the other hand occasionally bombed forward and looked dangerous anytime they try penetrating through Ghana's defense, but were either denied by a solid defensive shield or fluffed their opportunity.

The Satellites continued their dominance in midfield with piercing passes but could not break their opponent down.

Just when Burkina were crawling out of their shells, sending more men forward in search of the opener, Ghana broke deadlock through Daniel Lomotey five minutes to end the first half following calamitous defense from Kone.

Back from recess, the young Stallions wasted no time in trying to get the equaliser by increasing the tempo on Ghana.

With 13 minutes to end proceedings, Lomotey once again had the better of Kone and scored a brace to peg the scoreline at 0-2 before full time.

The burly striker used his strength to bully Kone inside the Burkina Faso area to lift it above and over the goalkeeper.

Ghana's defense led by captain Isahaku Konda stood on their grounds and thwarted all missiles thrown at them to help the Satellite bag all three points in group B.

The match, which was slated for Sunday evening, had to be  called off  due to problems with the floodlights at the venue

It was rescheduled on Mondayat 16:30 GMT

Ghana will play joint leaders Senegal on Wednesday and will book an early 2019 FIFA U20 World Cup qualification ticket if they win.