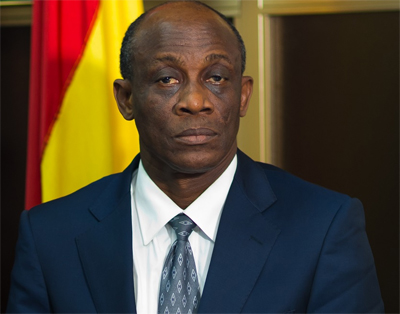 Finance Minister, Seth Terkper has disclosed that the Energy Sector Levy Account has accrued 350 million cedis as at August 2016.

He made the disclosure when he addressed the media on Wednesday, August 31st, 2016, on measures taken to address the legacy debts in the power sector.

Mr. Terkper added, “With respect to the energy debt service account which has a total of four separate accounts as we speak, is in excess of nearly GH¢280 million…We have the power generation and infrastructural support that’s a portion of that; the 250 million is the combination of the infrastructure. Also, the price stabilization levy has so far accrued about GH¢130 million approximately.”

The Energy Sector Levy Act, which was passed in December 2015, received lots of criticisms as fuel prices at the pumps went up as high as 27 percent.

As part of generating revenue to offset some accumulated debts within the country’s energy sector and make the energy companies viable, government in December 2015, introduced the Energy Sector levies to place taxes on some petroleum products.

The Energy Sector Levy saw the introduction of the energy debt recovery levy and the price stabilisation and recovery levy.

In addition, the road fund and the energy fund were revised upwards.

Meanwhile the TOR debt recovery levy, the cross-subsidy levy and the exploration levy were withdrawn.

In the State of the Nation address early this year, President John Mahama defended the passage of the Energy Sector Levy Act; saying the decision was needed to protect state intuitions such as the VRA and ECG from sinking under huge debts.

Meanwhile the Ministry of Finance, the Bank of Ghana (BoG), and the Ghana Bankers Association have announced plans to pay the legacy debt owed by government in the power sector.

According to the Ministry of Finance, government has arranged with the Bank of Ghana to create an escrow account to transfer 250 million cedis to settle part of the debts owed to 12 banks in the country.

This comes after government through the Ministry of Finance, negotiated the interest rate on the dollar and cedi components of the debt from 11 to 8.5 percent and 30 to 22 percent respectively.