Chaos in NDC as Alabi, Adam at war over flagbearership slot 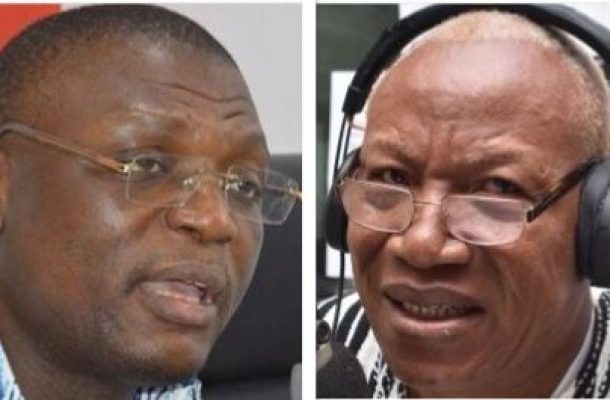 The opposition National Democratic Congress (NDC) is currently running on a timebomb as the National Organiser  Kofi Adams, and a flag bearer hopeful of the party, Professor Joshua Alabi have began trading words over the unoccupied flagbearership position of the party.

The two who have been throwing allegations and counter allegations at each other have taken it to a different level as Kofi Adams has referred to Prof. Alabi as a “toddler” and “kindergarten boy”.Mr Adams was reacting to comments by Professor Alabi that he (Kofi Adams) had incited party supporters to chase him and his supporters out of certain constituencies with machetes anytime they went about canvassing support for his presidential ambition.Prof Alabi in an interview on ClassFM alleged; “Kofi Adams met me in one of the constituencies in Krowor, [it was] reorganisation. That day I didn’t speak, I financed the whole programme there, yes, and he came and he got the opportunity to talk but I didn’t talk, I didn’t campaign, he met me there. We went round… to listen to the problems of the constituency and see how best we could bring the warring factions together… While he was campaigning for somebody, he has asked people in other constituencies to take cutlasses and chase us out when we come in. This is the party that we have; these are the executives that we have. If we want the party to progress the way we want it to progress let’s do things properly,” Responding to the allegation on ClassFM’s mid-day news programme, 12Live, on Monday,30 April 2018, Mr Adams said: “Truly, I asked people to chase anyone who come asking for votes for flag bearership from their constituencies”.He, however, denied inciting people to use weapons and machetes.For him, Prof Alabi “is losing it” for making such an allegation, adding: “He keeps talking by heart”.“Next time he is talking, he should talk like a Professor. You should have a basis before you talk. I have asked that they should be chased out, where did I say machetes?” Mr Adams asked, adding that Prof Alabi “should stop talking like a toddler”.Mr Adams explained that he was asked a specific question in March 2017 regarding his comments about former President John Mahama contesting for the NDC flag bearer slot and he has not been asked such a question again.He said the current government told citizens lies to coerce them to vote in 2016 so blaming Mr Mahama solely for the loss of the NDC in that poll is wrong.He emphasised that Mr Mahama has not declared whether he will contest the flag bearership or not, and that his comments were based on the outcome of the 2016 elections, insisting that it is wrong for people to assume that the NDC lost the 2016 elections because the then-presidential candidate was bad.