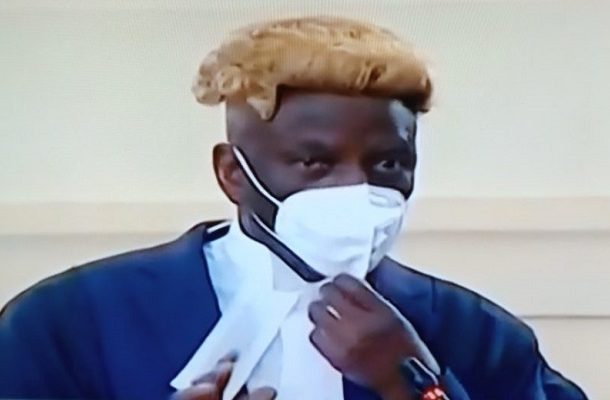 Lead Counsel for the second respondent in the ongoing 2020 election petition, President Akufo-Addo during Thursday's hearing at the Supreme Court said the petitioner should be charged for 'an abuse of court process'.

During legal argument on Thursday, Lawyer Akoto Ampaw who described the review application as "a classic case of an aggrieved party who has become emotional by the decision of the court (and) seeks to reargue his case through the back door of an apparently review application" said even though no cost is awarded in a 'constitutional matter', the Supreme Court should make this exceptional.

“ . . an abuse of court process and even though we are all aware that in constitutional matters like this no cost is awarded, I think this is a special occasion where cost should be awarded," he said.

After the SC gave its ruling and dismissed the application review, lawyer Akoto Ampaw reechoed his assertion; insisting that the petitioner has "abused court process".

Akoto-Ampaw came again: "I think the court should be amenable to grant cost even in constitutional matters".

And the Chief Justice rebutted; "Please we won’t".

The Supreme Court has overruled former President John Mahama’s application for review of its earlier decision not to compel the Chairperson of the Electoral Commission (EC), Madam Jean Mensa to testify.

Mahama, the petitioner in the ongoing election petition requested that the Apex Court review its February 11 decision which indicated that " . . simply put, we are not convinced and will not yield to the invitation being extended to us by counsel of the petitioner to order the respondents to enter the witness box to be cross-examined, accordingly we hereby overrule the objection raised by the counsel for the petitioner against the decision of the respondents declining to adduce evidence in this petition".

According to the lead counsel of the petitioner, Tsatsu Tsikata, the Court made fundamental errors of law and that those errors had occasioned “a miscarriage of justice against me (the Petitioner).”

However, after hearing arguments from all parties during today's hearing, the 9-member panel dismissed the application.

The panel of 7 judges was reconstituted to 9 because it was a review hearing.

The ruling which was delivered by the Chief Justice said the review application has failed.

Meanwhile, the application to stay proceeding filed by the petitioner is now moot.

It may be recalled that lawyer Tsatsu Tsikata filed two new applications at the Supreme Court after the motion to reopen their case was dismissed: Application to stay proceeding and Application for review.

According to the Chief Justice, the stay proceeding application has been struck out because it was pending the application for review and that has been dismissed.

The hearing has been adjourned to Monday 22nd February, 2021.