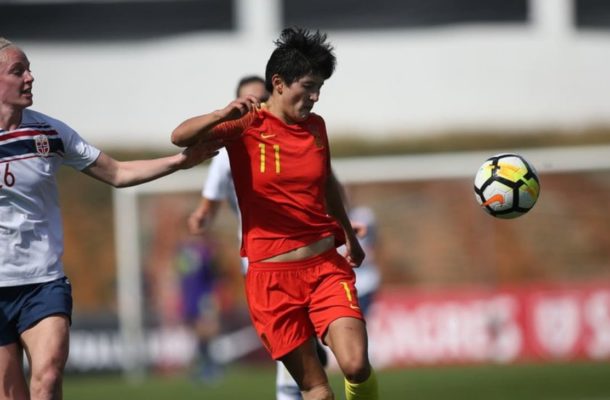 China PR's seven-game international winning streak came to an abrupt end, as a horror first half saw Jia Xiuquan's side fall to a 3-1 loss at the hands of Norway in their first match at the Algarve Cup in Portugal.

Wang Shanshan managed a late consolation goal for China, but their defeat is the heaviest since Jia took over as head coach last May, and the first time they have conceded three in a match since their 2018 AFC Women's Asian Cup semi-final defeat to Japan.

With 2018 AFC Women's Player of the Year Wang Shuang starting on the bench for the Steel Roses, Norway assumed the early ascendancy, and the Scandinavians were 1-0 up within nine minutes when former Jiangsu striker Isabell Herlovsen punished an error from goalkeeper Wang Shimeng.

World number 13 Norway continued to create chances, then doubled their lead through a Wu Haiyan own goal - with the Steel Roses captain Wu Haiyan heading the ball into her own net at the half-hour mark - and China's day got even worse when Norway's Emilie Haavi made it 3-0 in the 42nd minute.

With Wang Shuang and Zhang Rui introduced after the half-time break, the eight-time Asian champions lifted in the second period, creating far more attacking openings - few better than the one which saw Wang Shanshan round goalkeeper Ingrid Hjelmseth in the 67th minute, only to miss the target with her shot at goal.

The striker atoned somewhat for that miss in the dying stages, when she latched onto Gu Yasha's delivery to pull a goal back in the 90th minute, reducing the deficit to two.

Norway's win, their second from two matches in the tournament, means China PR are already out of contention of a place in the final, although they still have another group match to come against Denmark on Monday as well as a placement match two days later.

Thailand's France 2019 build-up continued with a 2-1 loss to Mexico at Larnaca's GSZ Stadium, in their second match at the Cyprus Women's Cup.

The Southeast Asians had been hoping to follow up Wednesday's excellent 4-0 win over Hungary with another three points, but fell behind within three minutes to a successfully converted penalty kick from Spanish-based attacker Charlyn Corral.

A close-range 48th-minute leveller from Thailand forward Taneekarn Dangda gave Nuengrutai Srathongvian's side renewed hope, but Corral struck again six minutes from time to seal a victory for Mexico, who had suffered a 5-0 thrashing at the hands of Italy just 48 hours prior.

The loss is a dent to Thailand's hopes of reaching the tournament's final, with one final group match remaining against the Italians on Monday.

A stunning five-goal haul from Sanju Yadav helped India to 10-0 win over Turkmenistan, while Jordan bounced back from their opening day loss to Northern Ireland with a 1-1 draw against Kazakhstan on Matchday Two of the Turkish Women's Cup.

India proved far too strong for their Central Asian opponents, with Yadav's quintuple supported by a hat-trick from Dangmei Grace, as the SAFF Women's champions piled on seven second half goals to move to four points from two matches in Group A.

Ever-reliable Jordanian captain Stephanie Al-Naber got her side off to a promising start with a 13th minute opener against the Kazakhs in their Group B clash in Side, but an equaliser from Kamila Kulmagambetova ensured the points would be shared.