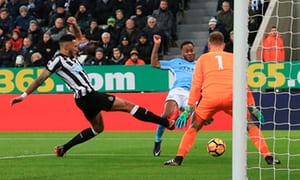 Christian Atsu was named amongst the subs in the 1-0 narrow defeat to run-away league leaders Manchester City on Wednesday at St.James Park.

Raheem Sterling’s 38th minute strike was enough to give Pep Guardiola his record 18th consecutive win and extend his unbeaten league run to an incredible 20 games.

Atsu was brought on in the 71st for Rolando Aarons but couldn’t affect the game because the Magpies were being pushed back and as a result forcing them to sit too deep.

City were fairly comfortable albeit Rafa Benitez’s men could’ve had a last minute equalizer but the header from Dwight Gayle from a Atsu cross went wide from the right post.

The result means City have now extended their lead by 15pts from second placed Manchester United.

Meanwhile Newcastle are 15th on the table after 20games played.