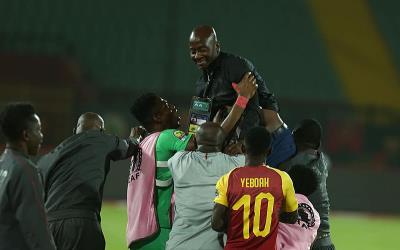 Coach Ibrahim Tanko is on the verge of making history when he leads his Black Mateors team against Ivory Coast in quest of  2020 Olympics ticket.

A win against the Group B winners in the Semi-Final clash on Tuesday at the U23 Afcon will see Ghana return to the Olympics after 16 years hiatus.

Ghana advanced to the Semi Final of the tournament with a 2-0  Victory over Mali, having been favoured by Egypt's victory over Cameroon on that same evening.

He will enter the history books as  the first Coach to end Ghana's 16 years search for Olympics participation should he win the first Semi Final match of the day, which kicks off at 5pm.

With Ivory Coast being Ghana's last  hurdle to cross to Tokyo 2020, Tanko thinks his team will give their all in Tuesday's cliffhanger.

"My team is always going one game after the other so tomorrow we have our final," he said during the prematch press conference on Monday

"We are going to do everything possible to win the game to qualify to the Olympics, which is our Target."

The former Freiburg coach came under serious criticism after his team's  3:2 lost against the Egyptians in the second group A encounter.

They took the lead twice but failed to hold on, and by the 80th minutes, Africa's first ever Gold medalist were trailing the Young Pharaohs.

But he did not give up even when he was standing on the brink of elimination after that painful defeat, promising he will fight till the end.

And it came to pass as their the Mateors qualified by superior goal advantage following Cameroon's defeat to the host, Egypt.

But Tanko thinks his team is at the Semi-final stage by merit, despite the admission that Egypt's victory over the Cameroonians aided him the qualification.

His team now goes in to grab one of the three available slots for the contents in the Tournament slated for June next year.

The Black Meteors will face Côte D’Ivoire at the Al Salam Stadium in Cairo on Tuesday 19 November.

The Ivorians qualified to the semis on top of Group B with six points alongside South Africa who placed second in the group with 5 points.

The Black Meteors made history in 1992 when they became the first African country to win a medal at the Olympics, and there are huge expectations by Ghanaians to see them back on stage.

A qualification to the final ends the wait for Olympic participation since Athens 2004.