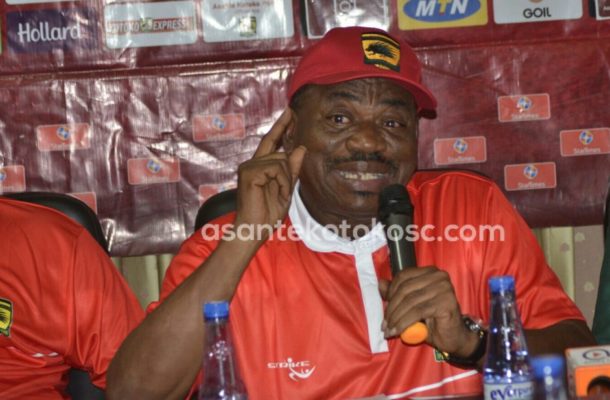 Asante Kotoko CEO George Amoako has hit back at Kim Grant over a "reckless"  statement on club's recruitment policy, describing him as an " ignoramus" person.

Kim Grant, who is now in charge of arch rival Hearts of Oak,  had  criticised Kotoko's recruitment  policy, saying "they brought a lot of players without any plan".

"I've looked at their team. There wasn't any league. If you put into that position they're making good use of it but they using lots of rift because they brought a lot of players without any plans," he said in an interview with Atinka FM.

But reacting to the former Black Star strikers' claim,  George Amoako  believes the new Phobian coach went overboard as he is "not privy" to the policy direction of the porcupines warriors.

"Lets forget about those reckless comment. He (Grant) is not privy to what we are doing doing," he fumed on Asempa FM

"He doesn't know what he is talking about. Does he know what we're doing as a club.

"Please forget some of these ignoramus and let's move on."

They v been drawn against Zambian sides Zesco United and Nkana FC as well as Al Hilal Omdurman from Sudan after  elminating Cotton Sport of Cameroon in the play off stage.