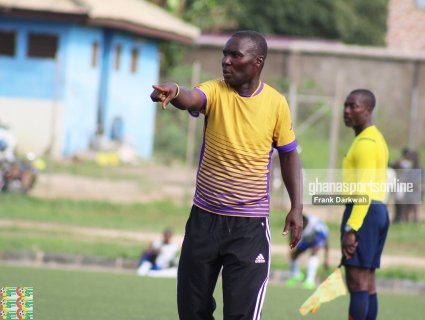 Acting Head Coach of Accra Hearts of Oak Edward Odoom has lamented over his team's inability to win against Elmina sharks on Sunday, a game that ended  1-1 at the Accra sports stadium.

The Phobians came from a goal down to clinch their second draw at home, with the visitors taking the lead in the 25th minute.

The rainbow boys had taking the game to the away side for much of the early exchanges of the game but the final result angered the home fans.

The wild reactions after the game were born out of frustration for which Odoom had to make a plea for "patience".

"I think we have disappointed our fans today,"he said at the post match interview.

"This is a match Hearts of oak should've won because we promised ourselves that the five matches we will play at home is operations 15 points.

"we have disappointed everybody and it's a bad day i will plead to fans to be patient with us in fact it's a very difficult moment for us."

Kofi Kordzi grabbed the equaliser for the phonians in the 38th minutes to increase his goal tally to six.

The Phobians have won two home games all season before Sunday's game, losing two and drawing one of them while Elmina Sharks were on a three match unbeaten run.