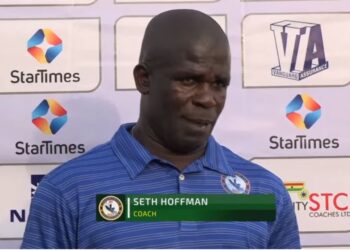 Berekum Chelsea Coach Seth Hoffman is making a return to Accra Sports Stadium in a clash with former club Accra Hearts of Oak in their Matchday 27 clash.

Hoffman left the Phobians after months of caretaker role but his clash with the 20 times league Champions on Sunday 29th of May is one of showdown.

He and his men stand between Hearts of Oak and their return to the summit of the league after Asante Kotoko grabbed a draw at Aduana to reclaim the top position.

Hearts trails their perennial rival Asante Kotoko by a point and a would be looking for an opportunity to topple the reds by defeating the Blues of Berekum.

It is a clash between Samuel Boadu and Seth Hoffman but latter's exploits against the Phobians that leave much to worry for the home fans.

He was promoted from the junior team to handle the main team after the club terminated the appointment of Henry Wellington.

He was was a member of the technical team after Kim Grant was appointed head coach of the club.

But before that, he had masterminded a 3-0 defeat of the Phobians in the 2013/14 season with then Wa All Stars (Now Legon Cities.

He team in this afternoon's clash -Chelsea-, in last season's cancelled league, defeated the Phobians at the Accra Sports Stadium in the Matchday one encounter.

The Phobians are in second place of the league with 46 points and a win against Chelsea brings them on top again why two points different.