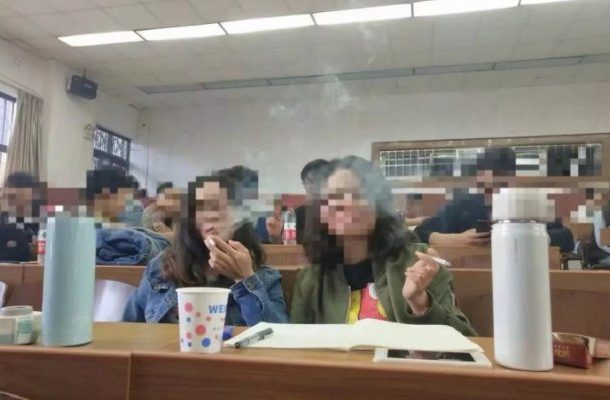 A series of photos showing students casually lighting up cigarettes in what looks like a college classroom have been doing the rounds online for several months, leaving everyone puzzled as to what is going on.

As it turns out, it’s just a display of hands-on learning in a course on tobacco.The controversial photos originally went viral on Weibo, China’s version of Twitter, back in November of last year, but they’ve been resurfacing on various other social networks and news sites ever since.

Young students can be seen lighting cigarettes and casually smoking them, while others take their photos with smartphones and the teacher casually observes the spectacle.

Teen smoking is frowned upon in China, as it is pretty much everywhere else, so the photos caused quite a stir online even after the dean of the university where the smoking took place offered an explanation.According to Zhao Zhengxiong, the dean of Yunan Agricultural University, the controversial photos were taking during a class on tobacco.

The teacher brought various brands of cigarettes into the classroom and invited the students to try them as a way to better understand tobacco, its flavors, the irritation it causes to the throat, the aftertaste it leaves in the mouth, and the post-combustion ash.

Although Zhao emphasized that the the students were not required to smoke, most of them did it anyway.Students at Yunan Agricultural University took to the internet to defend the course and their teacher, saying that this sort of “sensory evaluation” of tobacco is an important part of their “Cigarette Technology” class, and pointing out that it doesn’t take place every day.“This is not really smoking, we are learning this profession, sensory evaluation is necessary,” one student commented.Yunan Agricultural University insisted that this sort of applied learning is different than everyday smoking, adding that safety instructions are given before every class and that students are not required to attend them.

Still, a lot of people found the photos and the teaching method disturbing accusing the university of putting the students’ lives at risk.Some people just stuck to snarky comments like ” What is the final exam, who can smoke a cigarette faster?”Well, at least these students don’t need to sneak into the bathroom if they ever need to light up…Source: Odditycentral