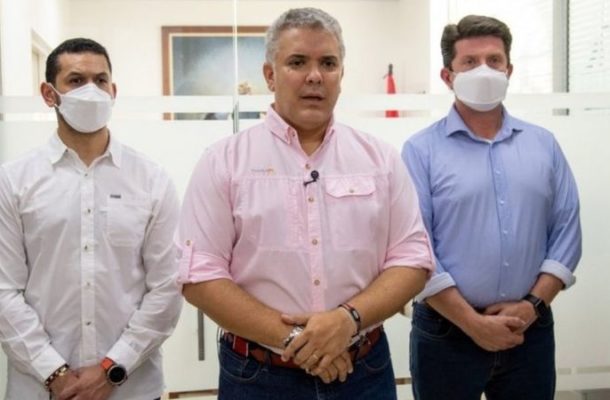 Gunfire has hit a helicopter carrying the president of Colombia as it flew near the border with Venezuela.

President Iván Duque was flying toward Cúcuta in the Norte de Santander province, alongside the defence minister, interior minister and the province's governor.

A spokesman for the presidency said nobody had been hurt in the incident.

Mr Duque denounced the "cowardly attack" and said he was not frightened "by violence or acts of terrorism".

"Our state is strong and Colombia is strong to confront this kind of threat," he said in a video address posted on Twitter. Security forces are under orders to find those responsible, he added.

Local newspaper Semana reports the occupants heard a noise as if something had hit the engine just as the helicopter was coming in to land.

The leftist National Liberation Army (ELN) operates in the Catatumbo region, which spans the Colombian-Venezuelan border.

Founded in 1964 to fight against inequality in land and wealth distribution, the ELN is the country's largest rebel group and is considered a terrorist organisation by Colombia, the US and the European Union.

Earlier this month the ELN denied any involvement in a car bomb attack on a military base in Cúcuta. The attack injured 36 people, including two US military advisers.