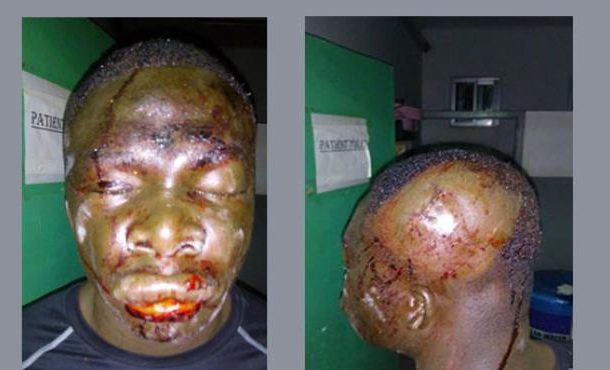 A COP attached to the Kpone District Police Headquarters ended up in the hospital after allegedly being pounded with the butt of his own gun in the Freezone Area at Tema in the Greater Accra Region.

The policeman, General Constable Emmanuel Bafi, was on Sunday said to have gone on night duty at F.S. International, a firm in the Free Zone enclave, when some suspected armed robbers attacked the yard and subjected him to severe beatings.

He was said to have been overpowered by the unknown assailants who made away with his AK 47 assault rifle.

Constable Bafi was sent to the Tema General Hospital for medical attention by some workers who visited the company that morning.

Information gathered by DAILY GUIDE indicated that the suspected robbers ransacked the factory and made away with properties and unspecified amount of money.

Assistant Superintendent of Police (ASP) Juliana Obeng, spokeswoman of the Tema Regional Police Command, confirmed the incident to DAILY GUIDE via telephone, saying that the case was under investigation.

According to her, efforts were being made to ensure that the perpetrators of the act were arrested to face the full rigors of the law.

She appealed to the general public to assist the police with information on that would lead to the arrests of the hoodlums.