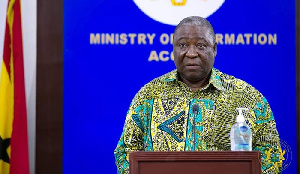 The youngest person among the 22 persons, who died of COVID-19 associated deaths as at May 10 in the country is a nine-year- old, while the oldest is 82 years of age, Dr Badu Sarkodie, Director of Public Health, Ghana Health Services has said.

The 22 deaths out of the total of 5,127 cases recorded in the country, represent a case fatality rate of 0.43 per cent, described as one of the best among countries.

Ghana’s fatality rate of 0.43 was being attributed to two major functions, namely “the quality of care” and “how early people report with the condition when they have it”, Dr Sarkodie explained.

“Putting it all together and comparing it with what is happening in other countries, the case fatality rate for Ghana is among the best globally”. According to Dr Sarkodie, the age rate for the COVID-19 associated deaths in Ghana was from nine years to 82 years and the Mean age was 55.5 years, while the Median age is 58 years.

There is clear preponderance of death for the males and the death rate ratio of male to female at 2.14 to 1.00 respectively.

“Males are also having the highest number of deaths in all age groups with the exception of the 25 to 34 years, where the death rate is the same”. He said most of the COVID deaths were associated with co-morbidities, and that out of the 22 deaths, 90.1 per cent had co-morbidity and 9.1 per cent (two persons) did not have any co-morbidity conditions.

On regional distribution of the COVID-19 deaths, Greater Accra is said to have the highest number, contributing to 68.2 per cent of the total deaths, followed by the Ashanti Region, 18.2, the Upper East Region having 9.1 per cent, and the North East Region recording 4.5 per cent.

With the various comorbid conditions, that is other severe medical conditions that were associated with the 22 COVID-deaths, hypertension was the highest in number of cases, followed by Diabetics mellitus, chronic liver disease, Asthma, obesity, stroke, acute kidney injury, interstitial pulmonary diseases, (IPD), and Congestive heart failures, among others.

The deaths were described as COVID-19 associated deaths because continuity had not been established with them; that is, whether for the COVID or the Co-mobility that resulted in the deaths, and “we have not done autopsy in these conditions and we cannot establish that much”, Dr Sarkodie stated.
GNA