COVID-19 and our Health Sector 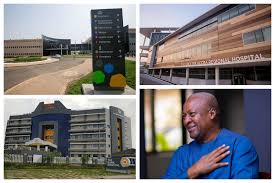 
You see, this COVID-19 to me, has come to stop Nana Addo and his NPP from their continuous lies to Ghanaians and exposed their incompetence. Before COVID-19, most people didn’t know that it was in the 2016 NPP manifesto that they were going to upgrade All district hospitals and build NEW ones where there is none. They used it heavily in 2016 but today when the NDC are quoting them, they tell the NDC to stop quoting. If such political characters are telling you in May 2020, that they will build 88 district hospitals and 6 regional hospitals within a year, and we are talking of a loan of about $3 billion in the midst of COVID-19, should you be stupid to believe them?
They had a kenkey party for supposed “exit” from IMF so, just imagine what Ghana would have gone through if Nana Addo had built just one district hospital in this era of Coronavirus? Now that they can’t equate the achievements of John Mahama in the health sector, Ghanaians have known the difference between a visionary leader (JM) and a populist leader (Nana Addo). We warned you about this different in 2016 but you ignored it.
A floating bridge built by Ursula Owusu got washed away by the rains. In the past, she would have said, John Mahama also built a floating bridge and it was washed away. Because she didn’t get Mahama to attach his name to her government’s incompetence, she turned around and blamed the Chorkor boys. She chose the chorkor boys to blame because that is the stronghold of the NDC so she loses nothing.
When nature exposes a government through diseases and rains, it means the time has come for that government to go. Trust me, Akufo Addo can never offer you anything better than what JM offered and will offer you. This NPPvirus too shall pass.
Dr. Lawrence is the Founder of the Diaspora Progressive Movement based in USA.