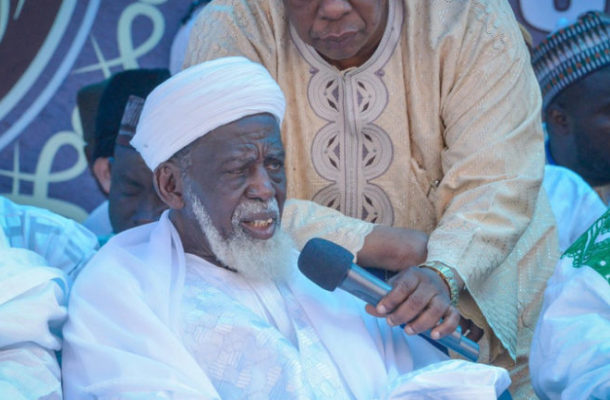 The National Chief Imam, Sheikh Osman Nuhu Sharubutu has called on Ghanaian Muslims to adhere strictly to directives announced by the Government to combat the spread of the Coronovirus disease.

Addressing a press conference on Monday to respond to the latest precautionary protocols announced by the government, which includes the suspension of congregational prayers in mosques, the Chief Imam said the measure should be adhered to by Muslims because it is well grounded in Islamic principles of promoting good health and preservation of life.

Ghana has so far confirmed six cases of the deadly Coronavirus which is sweeping through the world, and the government has announced series of measures, including tightening of the various ports of entries.

Last night, President Nana Addo Addo Dankwa Akuffo-Addo announced further protocols by the government which included the banning of all public gatherings, including congregational services in churches and mosques.

“This directive is not a departure from Islamic norms. It is grounded on sound Islamic principles and one of them is the love for life, as well as preservation and protection of life,” said the National Chief Imam.

The Chief Imam added that Muslims have to be well and physically fit to be able to worship Allah well so it is important for all to adhere to the protocols to promote good health and ensure the safety of all.

Sheikh Sharubutu adviced that the outbreak of the Coronavirus disease should also serve as a reminder to nations, particularly Ghana to always be grateful to God for what he has done for us.

Explaining further the need for Ghanaian Muslims to strictly adhere to the government’s protocols, especially the suspension of congregational prayers in the mosque, the Spokesperson of the National Chief Imam, Sheikh Aremayao Shuaib, said Islam is a religion of flexibility which accommodates such temporary measures during crisis.

“Islam is a religion of flexibility. In our jurisprudence, the Sharia (law) has three importan features that make it dynamic and viable for guiding life under any circumstance,” explained Sheikh Aremeyao.

“These features are; the flexibility of the laws of the sharia, its moderation and its conceptualisation.”

“Under the circumstance, the call by the Chief Imam for Muslims to adhere to the protocols falls under the feature of contextualization. The context within which we find ourselves dictate what we have to do.”

“There are several texts of the Holy Qur’an that suggest and give an indication of how modest and flexible the sharia is.”

Sheikh Aremeyao cited situations where certain things which are not permitted under sharia, are permissible under certain situations.

He said that even though a Muslim is not allowed to take in alcohol, sharia permits a Muslim to take alcohol if it is the only available liquid when one is suffering from massive thirst or hydration on a desert.

Meanwhile the National Chief Imam will organise a special national prayer and Qur’an recitation to pray to Allah to come to the aid of the nation in the midst of the Coronavirus.