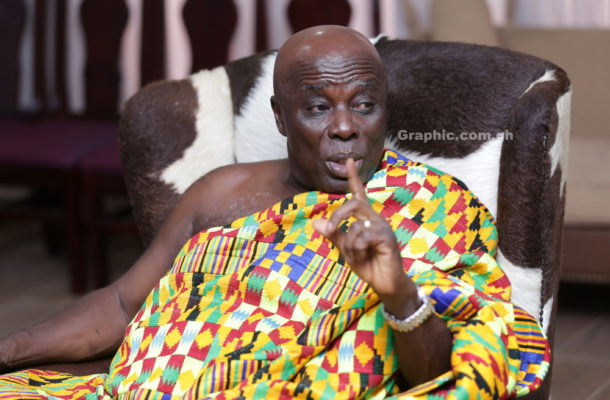 The Okyenhene - Osagyefuo Amoatia Ofori Panin II, has ordered for the retrieval of all dead bodies and internment to ease the 'unusual congestion' of morgues in various hospitals in Akyem Abuakwa amid the coronavirus pandemic.

The directive follows President Nana Addo Dankwa Akufo-Addo's refusal to lift the ban placed on social, religious and funeral gatherings as part of measures to contain the spread of the virus.

The Okyenhene in a statement disclosed that the current situation in public morgues in the Abuakwa land have become a matter of grave public concern.

According to the statement, the corpses continue to pile up on daily basis which poses a great health threat to the said facilities.

The statement issued on Monday, April 20, 2020 and singed by State Secretary, D.M. Ofori Atta, also ordered all Nananom to ensure all families adhere to the directives as they retrieve bodies of their dead relatives and bury them within one month to ease the congestion.

It said in accordance with Abuakwa customs, families can convey the body of their departed relative to the house to pay their last respect and necessary customary rites.

The statement, however, noted that the ban on all public funeral ceremonies issued earlier remain in force, adding that "this order is only in respect of burial proprieties and private customary observances".

This is credited partly to decision of families to indefinitely postpone the burial and funeral rites of departed relatives in expectation of the expiration of the directives of the President with regards to social distancing and regulations on public gatherings as a measure to contain the COVID 19 Pandemic.

However the situation in the morgues have become a matter of grave public
concern as corpses are continuing to pile up on a daily basis thus posing a health
threat to public hospitals.

To address this emergency, the Okyenhene is by this statement ordering all Nananom to ensure that all families retrieve the bodies of their relatives for
interment within a month with effect from this date.

Families must appreciate that compliance with this order is in their own interest as reports indicate the state of the corpses are deteriorating. This will
also avoid the unhealthy situation where corpses that are not retrieved before
the stated period are buried in mass graves.

In accordance with Akyem Abuakwa custom which demands respect for the dead, families are allowed to convey the mortal remains of their dearly departed home for brief observation and necessary customary rites.

Nananom and Family Heads are to ensure that all Presidential Directives and Executive Instruments concerning COVID-19 are strictly observed with the
cooperation of the security agencies.

It should be noted however that the ban on all public funeral ceremonies issued
earlier remain in force. This order is only in respect of burial proprieties and
private customary observances.

The cooperation of Hospitals, Health Authorities, MMDCEs and the Security
Services is greatly expected.

The Osagyefuo greatly appreciates the cooperation shown by the chiefs and
people of Akyem Abuakwa to the public measures to address the COVID-19
Pandemic.

He further takes this opportunity to express his heartfelt condolences to all
bereaved families.