Cross Rings: A Cool Way to Introduce Symbolism into Your Look 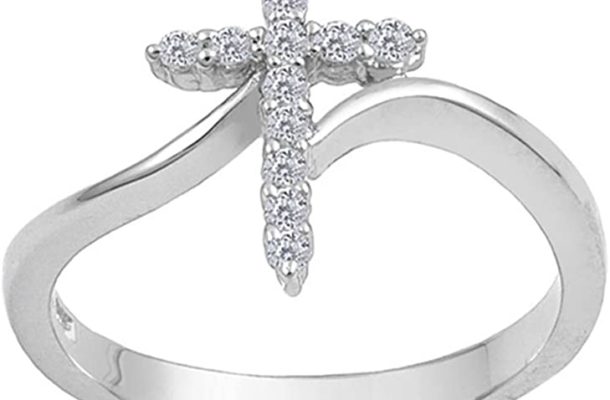 A cross is a versatile symbol. It goes without saying that it is a relic of all Christians. But did you know that people revered crosses long before the dawn of Christianity? Many ancient cultures bestowed two crossed bars with a special meaning.

Interestingly enough, early Christians didn’t wear crosses as a sign of their belief. Instead, they carved fish images on their accessories. Long story short, there was a time when this symbol wasn’t associated exclusively with religion.

What does it mean in the context of fashion? This means that you can use this symbol without the fear of condemnation coming from a religious community.

Strictly speaking, daring fashionistas have been wearing cross jewelry for decades. Some of the most prominent examples of cross-mania are Madonna’s 1980’s cross pendant and the iconic dangles in the ears of George Michael.

But what about cross rings? It seems like this symbol is overlooked in ornaments for hands. If you’re willing to introduce cross design into your style, rings are your chance to stand out.

Jewelry manufacturers offer a few variations of cross rings, let’s take a look at some of them. We draw inspiration from the ring jewelry collection available at https://www.bikerringshop.com/collections/cross-rings.

An impressive shape combined with an impressive symbol, this is its secret of attraction. Signets have long been considered to be a style for men but lately, more and more ladies have been adapting them as a distinctive piece of jewelry.

The highlight of every signet ring is a flat bezel that normally carries craved images. At the time when signets were used to seal and verify documents, these images were the initials or family crests.

Nowadays, when this s function is no longer relevant, a signet can feature any image including a cross.

This symbol can be carved, embossed, or lined up with jewels. If a single cross is not enough, you can find miniature images around the bezel or on the shank. And if you want to keep your cross private, it can surreptitiously sit on the band’s interior.

A trailblazing design is the highlight of bishop rings. Once they were a prerogative of Catholic Bishops but now everyone can benefit from the splendor they deliver. So what are bishop rings exactly?

They are as large as signet rings but instead of a flat bezel, they carry a humongous amethyst stone. Amethyst in a silver setting is a traditional style of these rings but modern trends bring fresh interpretations.

For instance, instead of the purple stone, these rings may accommodate rubies, agates, garnets, sapphires, and any other vibrant gemstone. ‘Where is the cross?’ you may ask.

Crosses adorn shanks inside and outside. One more interesting way to incorporate crosses is to assemble them from small gemstones and then mount them into a domed setting.

An eternity ring is a band embellished with a pattern that has neither a beginning nor an end. More often than not, eternity rings are given as a gift for engagement because their original meaning is eternal love. But if we replace love symbols with any other image, we’ll get an audacious piece of jewelry.

While engagement eternity rings are made of gold, cross-adorned items flaunt a predominantly silver finish. It is believed that Christian jewelry should be modest and discreet, and silver is the best choice in this case.

Cross patterns it accommodates are normally carved and oxidized for the sake of contrast and distinction. Raised cross designs are popular as well but they are a little more difficult to wear since the pattern curves around the finger and may cause slight discomfort.

If you enjoy some glint, there are gemstone-clad eternity rings, too. Again, a raised inlay would cause trouble wearing; therefore, these stones are buried deep into metal so that only their head sticks out. This is the so-called pavé setting. Crosses interspersed with shiny jewels are a sign of fashion jewelry rather than religious.

Cocktail rings are large and magnificent. On the one hand, they showcase a designer’s flight of imagination. On the other hand, they provide a fashionable way to stand out. And when such a ring houses a ‘controversial’ cross design, it is a one-two punch.

Cocktail rings boldly use religious and mundane imaginary such as roses, doves, lilies, icons, and many others. Crafted from precious metals, these symbols rise from the setting so that everyone around can take notice.

On top of that, cocktail rings don’t shy away from dazzling gemstones. Needless to say, this kind of jewelry is not intended for everyday wear.

World history knows many crosses, and some of them have nothing to do with religion. The most famous non-religious cross is the Iron Cross. Let’s omit its military background and focus on its current meaning instead.

This symbol is popularized by bikers, who once used it to manifest their nonconformist viewpoints. Today, it doesn’t necessarily bear the same significance; it’s simply a symbol dear to the biker community.

Nevertheless, if you flaunt an iron cross ring, you are guaranteed to turn heads.