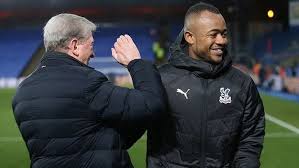 Roy Hodgson says Ayew, and co have not got near the Vardys

Hodgson says he is waiting for the summer transfer window before he can rectify Crystal Palace’s goalscoring problems.

He accepts Ayew has been "phenomenon" but says Palace will still need someone to bang in the goals better.

“I think he is a phenomenon. I got a statistic today that apparently since he came to us virtually two seasons ago he has been available for every game and that is amazing," he said.

“He is always there, one can’t speak highly enough of a player like that. His contribution has been enormous and this season you could argue it has been greater than last season as he has scored more goals.”

Hosgson had raised fears on his team's lack of power upfront before their 3:0 against Liecester City  on Saturday, saying his "strikers have not got near the Vardys".

And it was Vardy whose took his top-flight tally to 101 with a second-half double to give City their first win since the restart and boost their hopes of achieving a top-four Premier League finish.

“We haven’t had a good goalscoring record. The strikers have not got near the Vardys in terms of goals expected, Roy Hosgson before the game which Benteke and top-scorer Jordan Ayew had littele impact.

“There is a bottom line there, when you create chances someone has to put them in the back of the net and we have not been good enough in that area, not good enough as a team.

“We have to come to terms with the fact that someone has to start scoring goals.

“Let’s hope we have a good summer window to improve our squad and bring in one or two who can score our goal threats.”

The Eagles have scored just 28 times in 32 Premier League matches this season and only bottom side Norwich have a worse record.

Jordan Ayew is their leading scorer with nine – no-one else has scored more than three – and successive defeats have highlighted the problem with a potential challenge for European qualification foundering on a lack of goals.