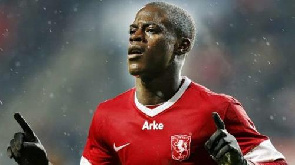 CSKA Sofia forward Edwin Gyasi claims he was the victim of racial abuse from Levski Sofia fans during his team's 1-0 loss in the Bulgarian league on Sunday.


According to the Ghanaian international he was greeted with monkey chants when he touched the ball through out the game.

The winger was sent off late in the first half as events heated up in the country's fiercest rivalry.

The 27 year old took to his social media page after the match to report the unfortunate incident.

" There is nothing worse than losing a match because of the ref’s decision-making! To all the CSKA fans : THANK YOU for the love and support ????????we are one family SAMO CSKA," he posted on Instagram.

"... and for the Levski Sofia fans: keep making those monkey sounds! It makes me feel sooooo strong and proud of where I come from," he added.

"I was at the match and I haven't heard any monkey noises," a Levski spokesman said. "We're not planning to issue a statement at this stage."