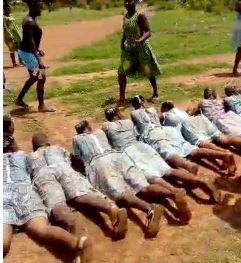 The management of the Dagban State SHS in Yendi in the Northern Region has begun probing the circumstances that led to first year students of the school being ordered to perform sexual gestures as part of their initiation to the school by their seniors.

The immoral gestures were videoed and disseminated via social media by one of the students, causing anger among parents and other stakeholders of the school.

The Assistant Headmaster of the school, when DAILY GUIDE called him last Saturday said that “we have seen the video of the incident which occurred three weeks ago and we are very disturbed by it. “Management upon hearing about the incident ordered a probe into the circumstances which led to the action by the senior students.”

The committee which was ordered to probe the incident has completed it assignment, he said, “and would submit its report to the school authorities for action.”

According to him, the school is situated far away from Yendi township, and with most teachers not living on the campus such activities could not have been noticed by the authorities.

Continuing, he said that 70 per cent of teachers live off campus, making total control of the students impossible. The students live on the campus with the security detail, he said.

Narrating the incident, he said that “it is customary for seniors to initiate newcomers to the school by sometimes asking them to wash the motorcycles of teachers and other insignificant chores. Unfortunately, on that fateful day when they went to their dormitories, some seniors ordered the first year students to come out and undertake the sexual gestures which were videoed by one of the students and disseminated via social media.”

According to him, “we have identified the student who videoed the act.  That student has fled the school as I speak to you.”

He assured parents and other stakeholders that “we shall do our best to ensure discipline in the school. Regarding this unfortunate incident when the report and recommendations for punitive measures are out, we shall implement them accordingly.”