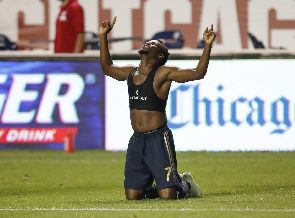 Ghana forward David Accam scored the game-winning goal in the 95th minute to lift the Philadelphia Union to a 4-3 victory over the Chicago Fire on Wednesday at Toyota Park in Bridgeview, Ill.

The winner came one minute after Bastian Schweinsteiger tied the game for Chicago in second-half stoppage time.

The Union gave up three leads before finally pulling away for good in the 6th minute of stoppage time thanks to a solo effort from Accam to earn a win over Chicago Fire on the road.

Schweinsteiger great’s header off a corner appeared to be enough to earn Chicago a come-from-behind draw before Accam, in his first appearance at Toyota Park since his spring move from the Fire, tore apart Chicago’s backline in the final seconds of the match.

Accam enjoyed full throttle of the game while compatriot Charles Sapong made a cameo appearance for the Union.