Demonstration at UEW leads to school's temporal closure with one dead, five admitted 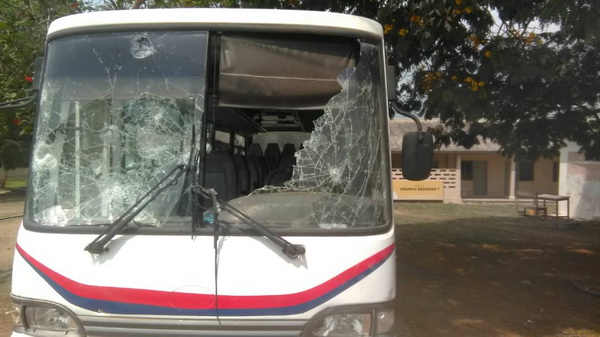 Demonstration at the University of Education, Winneba has led to the destruction of properties on the premises of the school.

Following the incident, authorities of the school have asked the students to leave the campus by sunset to enable calmness on the premises.

The students, as well  as some of the lecturers of the campus were demonstrating against what they call unjustifiable dismissal of some lecturers supervising project works by the Vice Chancellor Rev. . Prof. Afful-Broni.

They have also accused the Vice Chancellor of maladministration of the school's resource.

The demonstration also led to the destruction at Junior Common Room and the smashing of the windscreen of the
Students Representative Council bus.

The chaos that occurred on the campus has led to the hospitalization of five students with one reportedly dead while two others have been arrested.

A student student journalist Christian Larbi, who spoke to the press said that the police targeted the students with rubber bullets leading to injuries.