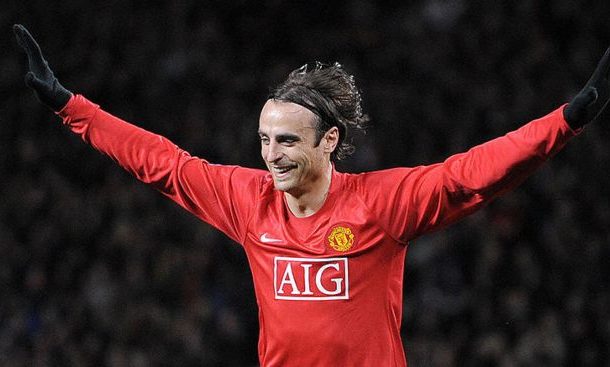 Dimitar Berbatov is one of the best Bulgarian strikers of all time. Read about his memorable career in especially Tottenham and Manchester United here.

Everyone remembers the Bulgarian Forward for his antics in Manchester United and Tottenham Hotspur.

His talent and quality were widely debatable among the fans.

He seemed lazy to keep up with the pace of the English game to some, while many saw his artistic brilliance on the pitch and held him in high regards.

Berbatov was not a supremely athletic player who covered a lot of ground. He was a classy, sublime, genius of a player who had influence on the game without even scoring.

Even with much criticism of his casual, arrogant attitude and somewhat slow pace, he created some magical moments and was a valuable asset for all of his teams.

His touch was pure silk and felt ever so elegant, even under pressure. He turned many heads with the quality of his escaping art from realistically inescapable situations.

This skill itself is an art which many of the greatest players like Ronaldo, Ronaldinho and the likes had.

Although Berbatov could never reach those levels he still was a master of his art and a joy to watch in form.


Dimitar Berbatov was raised by his father who was a professional footballer. He took up really quick from his father and got the chance to play for his father’s former club CSKA Sofia in the Bulgarian league.

He was doing great for a 17-year-old, playing for the first team and that too in front of a very passionate audience. Even after scoring 26 goals for the club, he was criticised for the bad performance of the team.

If this was not enough to deal with, Berbatov was kidnapped when he was 18 years old by a Bulgarian mafia boss Georgi Iliev who was forcing him to sign for his football club.

After much drama and his current team stepping in whose owner was a mafia boss as well, Berbatov was sent back unharmed, physically at least.

After this incident, his mother reported that he didn't pick up his phone for several weeks and completely isolated himself.

The constant threats to his wife and family started to worry him alot and he couldn't find the focus to play football anymore. It was then he decided to move from Bulgaria.

Leaving His Beloved Country Behind


The constant fear for his life and those he loved was affecting him a lot. Although he loved his country, he was not safe there.

Alas he decided to move away from Bulgaria and joined Bayer Leverkusen to search for happiness and continue his career.

His undeniable skill saw him get accustomed to the team very quickly as he became an important member of the squad, earning respect from his teammates. He was an important figure in their most successful season of 2002 where they reached the Champions League final.

In his 5 years with the club, Berbatov scored 91 goals in 201 appearances, catching the attention of many Europe's topflight clubs.


When the technical ability of the Bulgarian star had been recognised, his fans expected him to move to an elite club in Europe as speculation grew. Berbatov decided to move to Tottenham Hotspur which came as a shock to many.

His mastery of the game made it easy for him to adjust to the new team. Again, in no time, Bebatov was one of the most important players of the squad.

He produced exhilarating moments while scoring and made Tottenham football exciting with his graceful playing style and scoring ability. Even in his short campaign with the Spurs, he contributed 46 goals in 102 appearances and was finally offered the move of his career.


Sir Alex Ferguson always believed in building for the future when one is strong and signed Dimitar Berbatov to bolster the attack of the Champions League winning squad.

Berbatov, who is always up for a challenge, made it into the managers list as a super sub and started in many games in his first season.

He was quite influential in the two league titles he won with Manchester United and was the highest goal scorer in his second league title win in the 2010/11 season, according to TopScorersFootball.com. His infamous hat-trick against Liverpool, accentuated with the majestic bicycle-kick, was one of his best performances till date.

Even after such a brilliant run, he was left out of the Champions League final against FC Barcelona who opted for Michael Owen. Not being used as a key figure anymore, Berbatov was transferred to Fulham FC for a few seasons before leaving England.


Berbatov’s next destination would be Monaco where he produced great moments for his lone season there. He was regarded as a positive influence on the team while also scoring 13 goals for the club in 38 appearances.

Berbatov would play 17 matches for the Greek club PAOK and call it a career after a short stint with Kerala Blasters in India.


Berbatov put Bulgaria on the football map with his brilliance and magic. His record of 48 goals in 78 appearances for his country demonstrates his ability. Berbatov claims his international exploits as his biggest achievement and a dream come true.

Berbatov may be a polarising figure in world football, but for those who appreciate the beauty of the game, he is one of the most to ever play.