Republican presidential nominee Donald Trump has insisted that his campaign is united despite reports of deep divisions in the party after he made a series of missteps.
Speaking at a rally in Florida, Mr Trump said the campaign was "doing really well".
US media outlets said it was in turmoil after Mr Trump repeatedly attacked parents of a fallen US soldier.
Staffers told CNN that they "feel like they are wasting their time".
"I just want to tell you the campaign is doing really well," the nominee said in Daytona Beach.
"It's never been so well united... I would say right now it's the best in terms of being united that it's been since we began."
Earlier Mr Trump's campaign chairman Paul Manafort blamed reports of disunity on Mr Trump's opponent, Democrat Hillary Clinton.
"This is another Clinton narrative that she put out there and the media is picking up on," he said. "Mr Trump has appeared this week at crowds that are overflowing into the street." 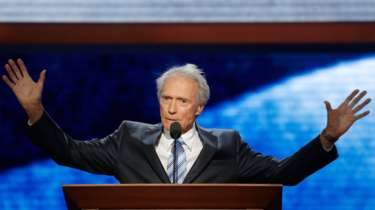 Mr Manafort called reports of campaign turmoil "a Clinton narrative"
The Donald Trump rollercoaster is picking up speed.
Thanks to a week with enough controversies for an entire election season, Republicans are flooding the media with reports of campaign chaos and an impending mass defection from their nominee if things don't turn around quickly.
Behind all these stories of political discord, however, is the simple fact that while insider establishment operatives may be looking for the exits, Republican officeholders who must eventually answer to the 13 million Trump primary voters have yet to break ranks.
Things will have to get very bad - much worse than they are now - to result in the sort of doomsday scenarios currently being pondered.
It is a simple political calculus. The key, as always, is in the polls and public sentiment.
If Mr Trump appears to have a reasonable chance to win in November, he will persevere, as he has all year.
If his poll numbers crash, and Republican politicians start worrying more about losing their own races in November than alienating their party's base, the Trump-coaster could career off the rails at last.
Going against Mr Trump is still a risky bet. And when it comes to preserving their jobs, politicians are all about minimising risk.
Hillary's email problem: read more from Anthony
The New York billionaire has been sharply criticised for his attacks on the bereaved parents of a US Muslim soldier killed in Iraq.
His ongoing war of words with Khizr and Ghazala Khan - the parents of Capt Humayun Khan - has intensified rifts within the Republican Party.
Trump sees more Republican support drift
Trump warns election could be 'rigged'
How the ordinary can shake up politics
Trump Taj Mahal casino shuts
NBC News reported that senior Republicans plan to stage an "intervention" to get the campaign back on message, stressing issues such as jobs and trade deals.
The effort will be led, according to NBC, by Republican National Committee Chairman Reince Priebus and Trump allies former House Speaker Newt Gingrich and former New York Mayor Rudy Giuliani.
"I think some of what Trump has done is very self-destructive," Mr Gingrich told Fox Business Network on Wednesday.
Three prominent Republicans - including New York Congressman Richard Hanna - have said this week that they would vote for Mrs Clinton, saying Mr Trump was unfit to serve as president.
Many Republicans opposed to Mr Trump have stopped short of supporting Mrs Clinton, saying they would vote for a third candidate instead.
  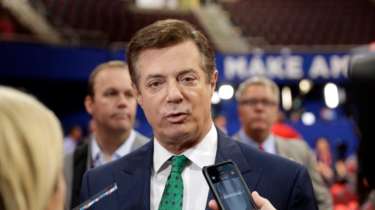 Clint Eastwood said Mr Trump was an enemy of political correctness
One person who did say he would back Mr Trump on Wednesday was Hollywood actor and director Clint Eastwood.
While stopping short of endorsing Mr Trump, Eastwood said he would vote for him. "I can understand where he's coming from, but I don't always agree with it," he told Esquire magazine.
Eastwood, 86, also said Mr Trump was an enemy of political correctness, adding: "We see people accusing people of being racist and all kinds of stuff. When I grew up, those things weren't called racist."
Mr Trump's rocky week so far:
Mr Trump declined to endorse fellow party members House Speaker Paul Ryan and Arizona Senator John McCain in their coming elections.
Republican Vice-Presidential Nominee Mike Pence broke with his running mate and endorsed Mr Ryan.
Mr Trump continued to criticise Khizr and Ghazala Khan despite repeated calls from his allies to stop.
Mr Trump warned supporters that the coming election could be "rigged", casting doubt on the fairness of the voting process.
He referred to his opponent, Mrs Clinton, as "the devil".
His top spokeswoman said policies put in place in 2009 by President Barack Obama were responsible for the 2004 death of Capt Khan.
Mr Trump said he would advise his daughter to find another job if she were the victim of sexual harassment. He was discussing the recent ousting of Fox News boss Roger Ailes after allegations of sexual harassment.
Mr Trump was handed a Purple Heart - a medal given to wounded members of the US military - at a campaign rally in Virginia. "I always wanted to get the Purple Heart," Mr Trump said. "This was much easier." The comments have drawn criticism from veterans' groups online.
Mr Trump joked that a mother and her crying baby should be ejected from the Virginia rally. "You can get the baby out of here," he said from the stage.